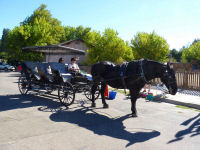 August 28, 2011 (Julian) – The women of Julian have a long and proud history of community service dating to 1926, when Ada Hildreth gathered some of her friends and neighbors to form the Julian Woman’s Club, a chapter of the national Greater Federation of Women’s Clubs.

The Julian Woman’s Club will honor Hildreth’s action and celebrate its 85th Anniversary on Wednesday, Sept. 7, with a scholarship luncheon to support Julian High School graduates. Guests and prospective members are welcome to attend. The cost is $10.

Ada Hildreth and her neighbors followed a growing national trend in forming the Woman’s Club. Private social clubs had long been closed to women.

According to the GFCW, the now-international organization’s roots can be traced back to 1868 “when Jane Cunningham Croly (1829-1901), a professional New York journalist who wrote under the pen name of Jennie June, attempted to attend a dinner at an all-male press club honoring British novelist Charles Dickens. Croly was denied admittance based upon her gender, and, in response, she formed a club for women.”
In 1890, Croly extended an invitation to women's clubs throughout the United States to attend a ratification convention in New York City. Sixty-three clubs attended and formed the General Federation of Women's Clubs.
Thirty six years later and seven years after women were granted the right to vote in the U.S., the Julian Woman’s Club (JWC) formed to carry out the organization’s mission of “community improvement by enhancing the lives of others through volunteer service.”
While women at the organization’s national level worked to change child labor laws, the Julian Woman’s Club focused on a problem closer to home: the nuisance of goats.
According to JWC past president Jan Mattias, the streets of Julian were littered with trash and overrun by free-range goats. Reducing the damage of the goats and beautifying the town was an early priority of the group, which raised money for the improvements with luncheons and community fundraising events, much as it does today.
Today, the mission of the Julian Woman’s Club is a broad one: to promote education, literacy, citizenship, conservation, health, crime prevention, arts, and international understanding.
In 85 years, the club has made significant contributions to the local community, working to create the Pioneer Museum, fundraising for the new Julian library, and reforesting the area after the devastating Cedar fire through the “Pennies for Pines” program. Last year, the club held a provocative “Panty Party,” gathering donations of new ladies underwear, which were forwarded to local women’s shelters.
The club is one of the most active women’s clubs in the region. The 60 members of the JWC organize and fund approximately 50 community enhancement projects and donate more than $4,200 to charitable initiatives each year, not counting the scholarships.
Last year, the group provided more than $7,000 in college scholarships to Julian High School graduates thanks to fundraising and posthumous donations by club members. Proceeds from the Sept. 7 luncheon will be used for similar scholarships in 2012.
“The Julian Woman’s Club is part of an international organization helping local communities worldwide,” said club president Janet Bragdon. “Our volunteer efforts are like stones cast in a pool, rippling outward.”

The JWC’s 85th Anniversary luncheon is being organized and chaired by Edie Seger of Julian Tea & Cottage Arts, with assistance from Diana Garrett and other volunteers. The work of the local club will be acknowledged by Kathi McGraw, president of the California Federation of Women’s Clubs (CFWC), and Pat Harvey, president of the CFWC’s regional Palomar District.