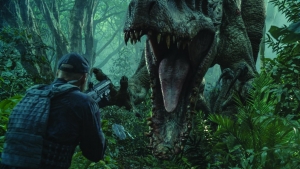 The Moderate Voice (reprinted with permission)

June 16, 2015 (San Diego's East County) - “You can’t repeat the past”, Nick said to Jay. “Can’t repeat the past? Why of course you can!” And we all know how it ended for Jay Gatsby, so after three films, why should it end differently for megalomaniacs and a few incautious geneticists? If there is any thematic through-line throughout the Jurassic Park films, it is that if you attempt to make a business out of nature, it will make a business out of you, and with that business comes an uncompromising bulldozer of carnage that only nature at its least sympathetic can create. The message of Jurassic World arguably boils down to the same idea, only there’s a slight nuance this time around — our failure comes not from our inability to comprehend nature but from our selective desire to do so. 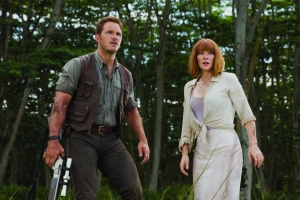 In a TED talk recorded nearly a decade ago, the great Jane Goodall, godmother of modern primatology, described the line between humans and animals as being “a very wuzzy line”, and that it is “getting wuzzier all the time”. This is taken to heart by characters like Owen, a raptor trainer played by Chris Pratt who sees the humanity in even our most vicious creations. He’s far from a glaze-eyed dreamer, however — he simply realizes that only by acknowledging these dangerous animals as complex minds with habits, feelings, and needs can we ever truly understand them, even at their most brutal and unhinged. This is what the analysts can’t seem to understand; viewing these animals through a glass window is not the same thing as protecting yourself, and just because you’ve assigned them a number doesn’t make them any less alive than you or I.

“Hold the phone”, you might be thinking. Raptor trainer? You read right. Jurassic World, the latest incarnation of the late John Hammond’s prehistoric theme park, is arguably larger than ever, and this time, it’s in full swing. Thousands of guests arrive by boat and plane to the shores of Isla Nublar just for a chance to see creatures from the most distant epochs of our Earth’s history. This is in spite of the calculations of analysts, who claim that in light of their resurrection, the sight of a dinosaur packs no more surprise than the sight of an elephant. “If only”, I thought. Nevertheless, Claire, played by the ever-welcome Bryce Dallas Howard, announces the release of a newly designed creature, neither dinosaur nor animal, to up the wow-factor and produce more thrill for their customers’ dollars. With this, new security measures have been put into place to ensure the safety of every visitor and crew member, including, yes, a trainer of velociraptors. 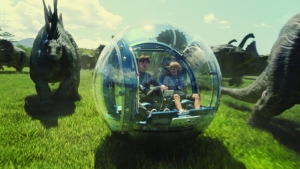 Do you have any suspicion that, gee, things just might not go as smoothly as calculated? If there’s any suspension of disbelief in this particular installment, it’s that after three separate tragedies in three separate films, people still haven’t decided this whole park idea isn’t worth pursuing. I imagined the immortal Werner Herzog out of frame, lost in ponder about what is clearly a depressing portrait of people’s refusal to learn from past disasters. This is no longer human curiosity gone awry – this is the kind of intense stupidity that Herzog himself describes as he gazes intently into the eyes of an incurious chicken, unthinking and, crucially, uncaring. Where the film succeeds is in making this part of the point. Some genuinely have learned, but these intelligent, measured people are on the payroll of others who either don’t get it or intentionally try not to. These are entities like the military, who’s interest in velociraptors only extends as far as their applicability as weapons and combat aids, completely oblivious to just how unpredictable they can be. I was reminded of the scenes from Michael Mann’s The Insider, specifically the recreated documentary footage of the big five tobacco CEO’s testifying in a court of law, claiming that they had no knowledge of tobacco’s addictiveness. Yeah. Okay.

But back to the wow-factor. It is astonishing that after over two decades of technological advance and its inevitable abuse, seeing dinosaurs roam side-by-side with human beings has not lost an ounce of the magic it first had. Fill up our screens with orcs, apes, and dragons all you’d like, but they will never be more than fantasy. Show us a diplodocus or a parasaurolophus ad infinitum and each time will bring the same wonder as the first. I asked myself why this was even as I was watching it, trying to hold back the tears every time a dinosaur graced the screen, and it may be because we as humans are infatuated with that which is just beyond our grasp. After four films and a hundred years of scientific discovery, 65 million years seems almost cruelly within reach. That has always been the greatest draw of the Jurassic Park films; for the price of a movie ticket, we can see spectacles of nature that, in the cosmic scale of things, we seem to have only just missed.

Now, what of the human stories? If there is a criticism of Jurassic World, it is that the plots and people have about as much dimension as a Roger Corman B-movie. Threads pop in and out with very little elegance, and the drama is perhaps less than groundbreaking. There. By acknowledging the film’s defects, I have hereby cemented my integrity as a proper film writer. I also don’t give the slightest damn, and I don’t suspect you will either. Jurassic Park began life as a pulp novel, and it has retained both those charms and those moments of creakiness in every installment. What matters is that these stories, as silly and popcorn-stuffed as they are, work best when they are drawn with childlike fascination, brought to life by actors and artists who are in love with the world they’re inhabiting. The characters are about as stock as one would expect in a summer blockbuster, but they are acted with integrity, if perhaps not poetry, and it is through this that we grow to care about them nonetheless.

I could talk more about the craft, which is impressive, or the individual performances, which involve you, but I won’t.  I’ve hopefully sold you enough on the thrills and the ideas that lend them weight, and for a film like this, that is enough. All other pleasures are yours to discover. No, this movie doesn’t possess the innovation and sense of world-sweeping wonder that Steven Spielberg’s original did, but after a third film as brittle and lifeless as the fossilized marvels at its center, I was relieved to finally feel the blood flowing again. This is popcorn filmmaking done effectively and efficiently. I expect many budding paleontologists to be shocked and awed into a lifetime of study and scientific exploration.

Spencer Moleda is a freelance writer, script supervisor, and motion picture researcher residing in Los Angeles, California. His experience ranges from reviewing movies to providing creative guidance to fledgling film projects. You can reach him at: www.spencermoleda.com