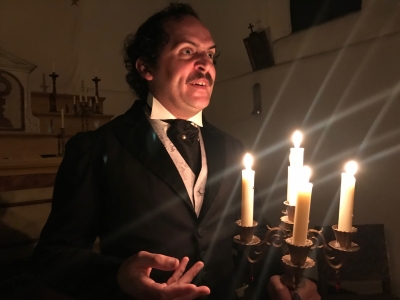 East County News Service
Source: Write Out Loud
Photo (left): Travis Rhett Wilson as Edgar Allan Poe
Six Poe-vocative Programs hosted by Edgar Allan Poe
October 8, 2020 (San Diego) -- Write Out Loud, an organization founded in 2007 with a commitment to inspire, challenge and entertain by reading literature aloud for a live audience, announces the third Annual San Diego (VIrtual) PoeFest, streaming from October 23rd - November 1st. PoeFest is produced by Write Out Loud in partnership with Save Our Heritage Organisation.
Artistic Director, Veronica Murphy shared “PoeFest has quickly become a San Diego favorite Halloween adventure. Everybody loves the wonderfully chilling stories of Poe. And there are so many authors to explore that have followed in his footsteps. Virtual is our only option for storytelling now - so we are embracing the challenge of capturing a phantasmic theatrical experience on video. We’ve recreated the atmosphere, filming by candlelight in the Historic Adobe Chapel in Old Town.”
Six Poe-vocative Programs hosted by Edgar Allan Poe!
Performers include Brittney Caldwell, Manny Fernandes, Linda Libby, Brian Mackey, Paul Maley, Sandra Ruiz, Rachael VanWormer, and Travis Rhett Wilson as Edgar Allan Poe.
Join Mr. Poe himself, through six episodes of fully staged theatrical performances of short stories of the macabre, including “The Tell-Tale Heart,” “The Yellow Wallpaper” and “La Llorona” and more.
Choose to see just one video program (or more) – or become a VIP and have access to all six videos plus an exclusive livestream event for opening night.  Access to video performances is restricted to the dates of the Festival (October 23 - November 1), but you can choose your watching time and date – binge watch on Halloween or see a performance every day for a week to keep all the days spooky!
Programs include: 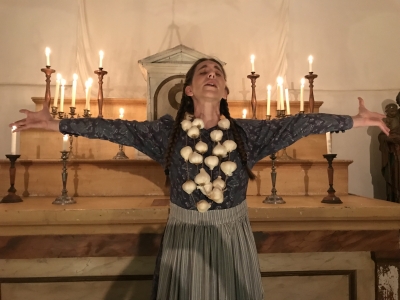