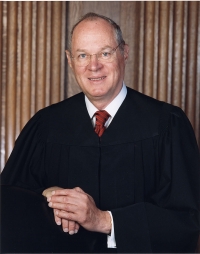 Trump has already compiled a list of nominees, all right-wing conservatives, and has said he will make overturning the Roe v. Wade case that legalized abortion a priority in choosing the next justice.

The President’s nomination must be confirmed by the Senate.  During the Obama administration, a Republican-controlled Senate blocked President Barack Obama’s liberal nominee from even being heard and refused to take up any nomination during Obama’s final year in office.

But Democrats don’t have enough members in the Senate to block Trump’s nominee.  Even if ailing Republican Senator John McCain were to be unable to cast a vote, Vice President Mike Pence could cast the deciding vote to put Trump’s nominee on the bench.

Democrats could succeed in blocking an extremist on key issues, however, by persuading moderate Republicans such as Maine Senator Susan Collins and Alaska’s Lisa Murkowski to vote against a nominee expected to overturn rights for women.

"The American people are perfectly capable of having their say on this issue, so let's give them a voice. Let's let the American people decide. The Senate will appropriately revisit the matter when it considers the qualifications of the nominee the next president nominates, whoever that might be," McConnell said.

Mitch McConnell has repeatedly changed the rules of the Senate to make it easier for Trump to pass laws. The last time he lowered the number of votes needed to pass. The only other lawmaker I've found in history to do the same was the President of the Reichstag (Congress) Herman Goring who lowered the number of votes needed to pass legislation that enabled Hitler to become a dictator. Mitch Mc Connel took an unprecedented action when he refused to let Congress vote, that's right REFUSED TO LET CONGRESS VOTE, when an opening came up in Obama's time. He said no voting on a Supreme Court appointment in an election year. Well, it's an election year again, but this time he wants to push Trump's right-wing pick through the court. And do Republicans agree with him? Hell yes. It's increasingly obvious the GOP doesn't want a law-driven America, they want one in which it's cool to lie, cheat and steal; it's OK to terrorize anyone who isn't white; it's mandatory for everyone (by everyone. I mean white men) to own and use guns; government by bullies and Rule by Sharia Law (albeit Christian religious law) It's going to be hard to live in a country where the only news is Fox Propaganda. But, the Patriots in 1776 fought against greater odds. They prevailed and so will we.

"You’ll regret this, You may regret it a lot sooner than you think" - Let that marinate.

Nearly 3 in 10 of all cloture motions filed in the HISTORY of the Senate were filed during McConnell’s tenure as Minority Leader. Any claim that the Senate’s current minority is simply following past practices is not credible. The filibuster existed before the Age of McConnell, but McConnell made them commonplace.