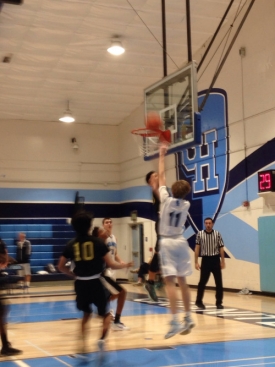 January 4, 2017 (El Cajon) - In their second game back from winter break, the JV boys basketball Eagles of Granite Hills took the court against the other Eagles, the ones from Olympian High in Chula Vista in round one of the Wolfpack Shootout.

The Eagles from East County got on the board first, but due to turnovers and bad shots, the game stayed at 2-0 for a while.  They finally made it 4-0, but the South County Eagles tied the game with two back-to-back layups at the end of the first quarter.

Olympian took their first lead early in the second on a fast break with numbers.  Granite Hills tied it up quickly and the teams continued their back and forth game.  The East County Eagles reclaimed the lead quickly on two free throws and led 8-6 with five and a half minutes left.  Olympian took that lead away too and took another lead at the four-minute mark, 10-8.  The South County Eagles took their biggest lead of the game with two more baskets and led 14-8.  Two free throws by Olympian quickly put Granite Hills down by 10, 18-8, as they continued to be unable to find the basket.  The South County Eagles led 20-8 at halftime. 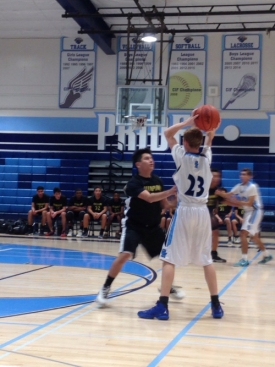 In the second half, it was much of the same; Olympian ran up the score and Granite Hills couldn't get anything to fall.  The dagger came in the third when Olympian scored four back-to-back baskets, one of them a three, to end the third 38-15.

In the fourth quarter, the South County Eagles kept up the pressure and extended their lead to over 30 points.  Olympian won with an impressive final score of 65-20.  Granite Hills falls to 1-1 in tournament play.

Pool play in the Wolfpack Shootout continues tomorrow for Granite Hills as they host Palo Verde and the varsity boys host Hilltop later tomorrow.  Tipoff for JV is at 3:00 p.m.

Does your son or daughter play a sport at a level other than JV?  Drop a line to @ECMagSports on Twitter (or leave a comment on this story) to request coverage!