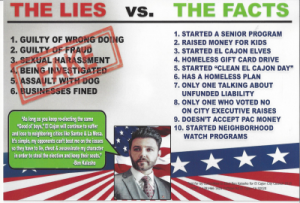 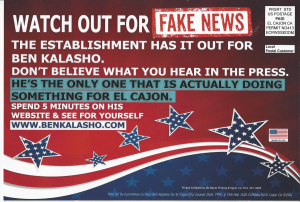 Guilty of fraud and wrongdoing – There are many incidents of wrongdoing including criminal, civil court and governmental agency findings. Here are the highlights, or lowlights:

Kalasho pled guilty to 2 criminal counts of worker’s compensation fraud, according to the San Diego District Attorney. View the document he signed pleading guilty, as ECM was first to report: https://www.eastcountymagazine.org/sites/eastcountymagazine.org/files/2018/August/Kalasho%20MisdeamenorRev.pdf?526 )

He was found by a jury to have committed fraud in a separate civil  case for lying about seeing a vehicle in his car wash crash into a neighboring business. View the judgment: https://www.eastcountymagazine.org/sites/eastcountymagazine.org/files/2017/June/Kalasho-IdealMarketFraudJudgment.pdf?740

Sexual harassment: Kalasho was found by a civil court judge to have sexually harassed beauty pageant contestants. Click links in this paragraph to view the actual court documents. Judge Timothy Taylor issued a judgment granting a motion to allow documents, a supporting declaration  and admissions to be admitted at an upcoming civil trial as true facts—meaning Kalasho cannot dispute the accuracy in court of the judge’s findings that Kalasho:

Other dubious business dealings:  A Chamber of Commerce that he founded was forced to change its name due to a trademark infringement, after the U.S. Patent and Trademark Office ordered Kalasho to cease using the name. View the federal order: https://www.eastcountymagazine.org/sites/eastcountymagazine.org/files/2017/June/Kalasho-TradeMarkRevoked.pdf?19

The state Attorney General’s office revoked the nonprofit status of the Miss Middle East Beauty Pageant run by the Kalashos and their Chamber, after they illegally failed to register it as a nonprofit with the IRS two years after founding the organization and holding multilple pageants. View the Attorney General’s letter sent to Kalasho and the Franchise Tax Board: https://www.eastcountymagazine.org/sites/eastcountymagazine.org/files/2017/November/Kalasho-AGDisallowance%20Letter_MISS%20MIDDLE%20EAST%20BEAUTY%20PAGEANT%20USA_0.pdf?212

Assault with dog:  Kalasho has been accused by two people of threatening to assault them with his trained attack dog and allowing the dog to lunge at them. Both ECM reporter Paul Kruze and a process server notified police of the threats. Read Kruze’s statement submitted to police:  http://www.sandiegouniontribune.com/news/watchdog/sd-reporter-s-statement-to-police-about-councilman-ban-kalasho-20180705-acrobat.html . Posts on Kalasho’s Facebook page confirmed an altercation with Kruze involving the dog, though their accounts of what transpired differed.

A police report has also been filed by Jesse Kendrick, son of Kalasho’s political opponent, Councilman Gary Kendrick, alleging that Kalasho followed, stalked and harassed Jesse while he was campaigning for his father, frightening him and forcing him to go home for his safety. The next day, both Jesse and Gary Kendrick allege that they were again followed and harassed by Kalasho.  Their police complaint is incident number 18008640. View Jesse Kendrick’s statement of the incidents, sent in an email to ECM, here.

More wrongdoing: Kalasho also agreed to a settlement in a federal lawsuit filed by activist Mark Lane. Kalasho was accused of violating the U.S. Constitution by blocking critics on his social media and deleting their comments. He agreed in the settlement to stop doing these actions, but days after the settlement, Lane accused Kalasho of again deleting his posts illegally.

Kalasho’s flyer also lists several items he claims are “facts.” Here are the actual facts about those items:

Kalasho posted video of himself and others giving out gifts to seniors in a rest home.  He called the group “El Cajon Elves.” However this was not a city program. The City Council rejected this proposal based on Kalasho’s record of fraudulent activities. He started the organization unofficially on his own, visiting a senior center to deliver holiday gifts and other items.

According to a post on his Facebook page, Kalasho gave some gift cards to teachers at Greenfield Elementary School.  This action drew protesters upset over the court findings of sexual harassment by Kalasho to bring “No Kalasho in our school” signs at recent council meetings.

This is the same as number one.

Kalasho has held gift card drives at a Masquerade Ball that he hosts, according to announcements for the event posted on his social media. But he has provided no information to media to document who received the donated gift cards. Because the state revoked the nonprofit status of Kalasho’s nonprofit, there are no public records available to document any claims he makes of charitable contributions by his privately-owned organizations.

This was a revival of a previous program conducted by  El Cajon’s downtown Community Development Corporation. The current clean-up events are primarily run by Councilman Steve Goble, however Councilman Kalasho did attend at least one event.

His homeless plan proposed that the city hire 10 homeless individuals and confiscate shopping carts from homeless people.  Council rejected this proposal due to liability concerns, potential conflicts with city labor contracts, and because Downtown Management Partners already hire formerly homeless individuals who are residents of the East County Transitional Living Center and have passed screenings to assure they are not using drugs or alcohol. Instead, the Council adopted a broader, multi-point plan to reduce homelessness proposed by the  East County Regional Task force on the Homeless. You can read details here:  https://www.eastcountymagazine.org/el-cajon-providing-comprehensive-leadership-homelessness.

The City has $44 million in reserves and is now putting extra funds aside annually for unfunded liabilities. It is true that like many cities, El Cajon is facing pension under-funding issues as the city manager cautioned last year. However the city has been taking steps to grow its revenues through new hotels, car dealers and soon, a performing arts center reopening. These actions were underway before Kalasho joined the Council.

The City Council voted to give a 2.5% pay raise to all employees, including workers who went several years with no pay increase. Kalasho was the only no vote.

As for conflict of interest concerns,  Kalasho’s failure to recuse himself from a key vote in which he had a conflict of interest due to a hefty contribution his Chamber received from Waste Management cost the city thousands of dollars to rescind and revote on trash collection liens, with a new city-paid mailing to notify those impacted. http://www.sandiegouniontribune.com/news/watchdog/sd-me-kalasho-conflict-20171113-story.html.