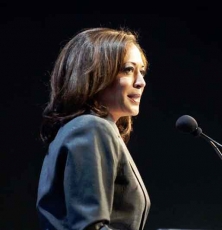 May 6, 2016 (San Diego) – California Attorney General Kamala Harris, who is running for the U.S. Senate, let the statute of limitations run out without filing charges over secret meetings in Poland between a Southern California Edison executive and then-president of the California Public Utilities Commission (CPUC)  Michael Peevey.   The secret meeting appeared to be illegal and instrumental in formation of a deal that forced ratepayers to foot the bill for billions of dollars related to the San Onofre nuclear power plant settlement.

“What Kamala Harris is doing is like a copy who witnessed a bank heist and did nothing,” Charles Langley, public advocate at Public Watchdogs, told East County Magazine.

But Michael Shanes, San Diego Consumer Action Network, defended Harris' actions. In an e-mail to ECM, he wrote, "...there was no criminal activity and Harris did the obvious by declining to press charges."

Investigators for Harris’ office acknowledged in court papers that ex parte communications, such as the Poland meeting are alleged to be, are illegal and that participants of ex-parte can be found guilty of conspiring to obstruct justice, a felony. The meetings occurred in March 2013, so the statute of limitations has now run out, though Harris had the evidence over a year ago.

Harris’ office issued a statement indicating that “No government agency, and no public utilities company is above the law. While we cannot disclose details of any ongoing criminal investigations, this investigation will go where the evidence takes us, and any potential charges would be filed on the facts of the case, and not an election cycle.”  Her office later reportedly clarified that the statute of limitations on other aspects of the investigation have not yet run out.

Harris has drawn fire for previously allowing a statute of limitations to run out without ever filing criminal charges in the San Bruno pipeline explosion despite evidence of safety rule violations by Pacific Gas & Electric.

The CPUC’s administrative law judge in the San Onofre case, Melanie Darling, stepped down after a search warrant showed she, too, had inappropriate communications with commissioners over backroom dealings in the case, the San Diego Union-Tribune reported.  The CPUC’s former president and a commissioner are currently under state and federal criminal investigations.

Darling has been replaced by Maribeth Bushey, whose ties to utilities have also been called into question on at least one case, though on others she has issued decisions that were pro-consumer.  A former attorney for SDG&E, Bushey was accused in 2012 by former San Diego City Attorney Mike Aguirre of using her position as CPUC administrative law judge to obstruct justice for wildfire survivors following fires found to be caused by SDG&E power lines, as ECM reported.    On two other cases, Bushey did find in favor of SDG&E consumers/ratepayers, though denied legal fees for Aguirre. (http://docs.cpuc.ca.gov/PublishedDocs/Published/G000/M040/K674/40674698.PDF and http://docs.cpuc.ca.gov/PublishedDocs/EFILE/PD/126478.PDF).

As for Harris' record on energy cases, she denied a request by the California Native American Heritage Commission to file legal action over Pattern Energy's Ocotillo Wind Energy project found by the commission to have been built illegally on Bureau of Land Management property over a santified Native American cemetary. (See ECM's article on the NAHC findings.)  Harris claimed the NAHC lacked legal authority to sue the federal government, a point disputed by other legal experts. She also claimed she had an unspecified conflict of interest and could not represented the NAHC on the Ocotillo matter, but failed to assign anyone else in her office to do so.  Many suspected Harris did not want to bring political embarssment to Governor Jerry Brown, a vocal advocate of the project that provides power to SDG&E; Brown's sister also sits on the board of directors for Sempra Energy, SDG&E's parent company.

Harris has previously drawn praise from consumer watchdogs for standing up to big banks  to secure a landmark settlement to help homeowners and for crafting a homeowners bill of rights. But when it comes to standing up to energy companies, she has disappointed some consumer advocates.

Langley has called for reform legislation such as ACA 11, a constitutional amendment that would dismantle the California Utilities Commission and transfer much of its regulatory powers to other entities.  That measure recently passed a committee by a 12-1 vote, as ECM reported.

“The problem with the CPUC is that the cancer of corruption goes straight to the bone,” Langley stated in an e-mail to ECM.  “There is no reforming CPUC. It is simply too corrupt. The Attorney General won’t stand up for us. The Governor won’t reform it…. Anything is better than what we have. Right now asking the CPUC to commit an act of justice is like asking a drug addled heroin addict to give up the addiction. There is no hope. “

The solution is municipal utility districts. They are already legal -- we don't need new laws passed. They are under local control with local elected boards (not the CPUC). Anaheim and Riverside have much lower rates that those of us forced to use Edison, SDG&E and PG&E. We are now forced by the CPUC to pay private utilities large profits and also pay for their incompetence. This won't be an easy fight, but is the only current legal way to be out from under the CPUC and private utility companies. The legislation mentioned in this story will only rearrange the deck chairs and is a distraction rather than a solution. All three California private utilities have repeatedly demonstrated they put profits before safety and continue to gouge us with the highest electric rates in the continental United States. http://www.latimes.com/local/lanow/la-me-ln-electric-bills-differ-private-companies-charge-more-than-public-utilities-20150614-story.html Here is another chart comparing private and public rates. http://www.scppa.org/Downloads/Rates/chart1.pdf The belows chart shows 2012 rates. The problem has only gotten worse since then with no end in site as long as we're under the thumb of the CPUC and private utilities. https://sanonofresafety.files.wordpress.com/2011/11/compareyourelectricrates2012-04.pdf Donna Gilmore SanOnofreSafety.org