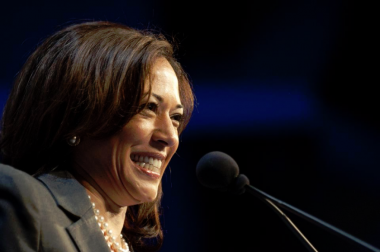 November 11, 2016 (San Diego) — Kamala Harris will be California’s first African-American U.S. Senator and the first Indian-American in the U.S. Senate.  Harris, 52, a Democrat currently serving as California’s Attorney General, won over 62% of the votes,  AP reported, winning a landslide victory over Loretta Sanchez, a Democrat who represents California in the 46th Congressional district.

Harris will replace long-serving Senator Barbara Boxer, who is retiring.  Under the state’s top-two primary system, no Republican qualified for the November ballot.

“This is about who we are. We are California. We are proud,” Harris declared in her acceptance speech on election night.  “We know the stakes are high. We know we are making a commitment tonight… to do everything that we know that needs to happen in this country to heal.”

While the nation was still waiting for results of the Presidential race, Harris fired up the crowd with a call to “fight for who we are and our ideals” and be committed to “bringing this country together.”

Many believe that Harris has the fortitude and background - both as a daughter of community activists and her reputation earned to being “tough as nails, yet sunny in disposition, a fierce negotiator” during her five year tenure as Attorney General for California- to be that champion of California values.

“When we have been attacked and when our ideals and fundamental views are being attacked. Do we retreat or do we fight?” Harris asked her crowd amongst cheers. “I say we fight. I intend to fight for our ideals.”

At a time, when 61.5% of California voted for Clinton and now face fears of a troubled future, despondent voters may turn their faith toward Harris.  CNN’s Candy Crowley asked Harris about being referenced as “the female Barack Obama.”  Harris, who believes Obama has done “an extraordinary job” as President of United States, says she is “humbled” by the comparison.

“I am so proud to represent this beautiful, diverse state.”  Harris says during her acceptance speech. She addressed all California communities, noting that our state has a diverse population with the largest numbers of immigrants in the U.S.

Citing the Democratic platform, she continued, “I intend to fight for the civil rights of all people, including those we always fought for, in terms of allowing them to marry the person they love.”

On labor, she stated, “I intend to defend for workers and their rights for collective bargain.”

She also vowed to fight for “common sense gun safety; it’s just the right thing to do. They suggest you either take the 2nd Amendment or you want to take everyone’s guns away. That is a false choice.”

Harris slowed the momentum of her vibrato to the crowd, and paused for a somber straight-in-the-eye stare into the camera.   “Our ideals are at stake right now.”

Harris believes we are in a pivotal moment in history and that it is time for our country at large to reflect and “look in the mirror” to ask the question, “Who are we?”

She says that in California, the answer is a good one. “We are a great country!” It is time, she says, to ensure the words of our American forefathers back in 1776 remain true today, “that we are all equals and we should all be treated as equal.”

Harris spoke of the fight for freedom and equality, noting that any gains made are not permanent. Yet, she called on people to not fall into a negative pit of despair.  She referenced a quote from civil rights activist Coretta Scott King, who said, “The fight for civil rights, justice and equality… must be fought and won with each generation.”

Harris urged the crowd, “Do not be overwhelmed. Do not throw up our hands, when it’s time to roll up our sleeves.”  She concluded, “Fight for who we are. That’s what we are about to go do. And I could not be more proud to represent my beautiful state.”

Kamala Harris is an open borders sanctuary city supporter. She will do great in California as it sinks into the financial and criminal abyss. As for the other 49 states? She will be as toxic as a sewer system. She would get those 55 electoral votes in Kalifornia and then it would be over. She is bad for California and she is bad for America.

If she had run for president I would have voted for her.
Loretta Sanchez was great but Kamala Harris is Presidential material. As a career prosecutor, she has helped keep America safe. Harris has handled the balancing act required by California of its Attorney General's office brilliantly, and is on par with Obama in terms of charisma and communicates a unique but sound vision of preventative crime on the campaign trail.

They are not "undocumented immigrants" they are illegal immigrants! They have broken our immigration laws. If you don't like the laws change them, good luck with that under the Trump administration. Meanwhile ENFORCE THE LAW. As the Attorney General I hope you understand how that works?

Got to wonder how the breakdown of illegal alien vote percentage was on this race.