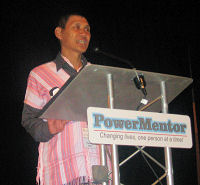 The Karen Organization was formed in 2009, after a “huge wave of population started to come in 2007-2008,” Nao Kabashima, co-founder and executive director of the Karen Organization of San Diego told ECM. ”Last year was a huge year for us; we got a grant from the U.S. Department of Human Services. “ The group aims to start a volunteer program in the near future.

The New Year’s celebration started off with a youth doing one last dance rehearsal. Then, the festivities began with an opening speech by Yaw Lay Htoo, Chairperson, who spoke in the Burmese language. Hsit Hsa Paw, part of the Karen Organization’s San Diego staff, translated. Hilda Ro, part of the Karen New Year Committee, read off the program. The Burmese and American flags were then honored with the American National Anthem and the Karen National Song “Blessed Country.” The Karen Union Proclamation letter was also read.

There were several honored guest speakers. The first was Sergeant Cynthia Hanna from the San Diego Police Department with Paw translating. “I’m part of the Multicultural Community relations office. The Karen arrived in San Diego only in 2007, and yet you’ve had such a wonderful, positive impact on our city. There are two reasons. One is because of the young people. As you saw in the dancing, they haven’t forgotten their culture or heritage. And that is a true gift to the city. I would like to congratulate the mothers and fathers who made the difficult transition to the U.S. I wish you peace, prosperity, and all you hope to accomplish in the new year.”

Next up was a video presentation on the Karen New Year history and their flag.  According to the video, "They originally lived in Babylon, traveled to Mongolia in 2234 BC, then moved to Tibet, and arrived in Burma through Mt Everest. In 1931, they got permission to celebrate Karen New Year on the Le (name of the month) 1st. On January 8, 1932, the first Karen New Year was celebrated. Then, it was celebrated again on December 27, 1932 in Pha-pun. This became a national holiday in 1937 after Burma separated from India.”

Karen arrived in Burma in 739 BC. In 1939, all of the Karen people celebrated Karen New Year for the first time.  In 1970, Congress in Burma decided that Pya Tho as the Le 1st (10th month of the Burmese calendar).

The Karen flag contains the colors- red, white and blue as well as the rising sun with nine rays and a drum. The red stands for courage and bravery, the white symbolizes purity and simplicity of spirit, blue represents loyalty and patriotism, the rising sun is the development of Burma, the nine rays are the nine rivers the Karen people traveled by, and the drum stands for their civilization and cultural development. 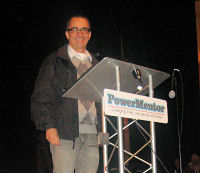 The next guest speaker was Crawford High School, Vice Principal, Diego Gutierrez, who greeted everyone with a shout. Ser Poh Phaw translated. “Good morning! On behalf of the school administration and the teachers, we welcome you to our facility. I am an immigrant myself; I know how hard it is to leave your home country. We’re grateful our new home country took us in and gave us great opportunities. The greatest gift you could give us is your children, to have a greater education and excel in the U.S. I was here for the first time last year, and it was absolutely wonderful! In Spanish, we say, ‘Feliz Karen Nuevo Año!’”

Last up was San Diego City Councilmember, Marti Emerald. Paw translated for her. “In City Heights, more than sixty languages are spoken. And somehow, we all manage to understand one another and create a strong community. We do that every day of the year. But our new year is a special time. My heart is filled with hope and confidence that we’ll come together as a community and create better lives for all of us. I couldn’t help but notice you have the same colors as the American flag. The red represents the blood shed for freedom, the blue symbolizes the true patriotism we all share, and the white stands for purity. I was given this flower on my lapel when I came in. We know that after a long winter, flowers give way to new seeds, and new seeds, new beginnings. Happy New Year!”

The entertainment was four music, six dances, and two fashion shows. There were kids as young as elementary school to high school youth to a few men performing and showcasing their talents. The different dances included the Karen Done Dance performed by many high school boys and girls, Karenni Kids dance, Karen Kids Dance, Karen Bamboo Dance, a Chin Dance, and a Karen Ladies Dance by BKG. There was a kid's fashion show and a youth fashion show.

In the middle of the entertainment, Nao Kabashima, co-founder and executive director of the Karen Organization of San Diego, was given two unexpected gifts- flowers and a plaque as a thank you for helping put all this together. This kind gesture caught her off guard. “I never expected this. This community means a lot to me. I want to say thank you.”

After the entertainment, Kabashima and Htoo thanked everyone for coming and supporting the Karen community, and Htoo wished the Karen New Year would bring success.