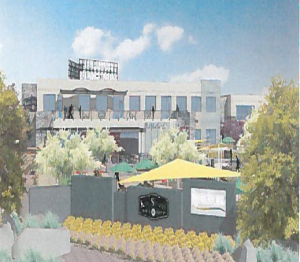 By Mike Allen
April 16, 2019 (Santee) -- Santee’s largest commercial project in many years, a Karl Strauss brewery/restaurant on 10 acres off Cuyamaca Street next to Trolley Square, was officially put back into play after the San Diego beer company and environmental groups came to agreement about the project.

The City Council approved the new brewery complex in December 2015, but the project never started construction because of objections posed by Preserve Wild Santee and the Center for Biological Diversity, an Arizona based organization.

“They objected to the greenhouse gas analysis (in the environmental report) and the project’s layout,” said John O’Donnell, Santee’s principal planner.
Rather than filing a lawsuit, the environmentalists entered into a series of negotiations with Karl Strauss, with the parties signing tolling agreements to work out their differences. The agreements were extend several times, resulting in a delay of more than three years causing some beer afficionados to create websites on Facebook such as whereiskarlsantee to question what was happening.
According to an email released by the city from Karl Strauss President Matt Rattner, the dispute between the brewer and environmental groups is over.
“I wanted to let you know that we have reached a settlement with Preserve Wild Santee and there is no need to extend the tolling agreement further. We look forward to proceeding with our project and greatly appreciate your support and patience,” Ratter wrote in February.
In an email last week from Van Collinsworth, founder of Preserve Wild Santee, he said his group asked Karl Strauss to make specific improvements to the project that were intended to benefit Santee and its wildlife.
“The project will emphasize natural elements to take advantage of its location as the central gateway to the San Diego River Park in the heart of Santee,” said Collinsworth in his email. “The brewery campus will incorporate a variety of features to ensure minimal environmental impact  including solar and other energy efficient design elements.
Collinsworth said the project will use some proceeds from excess clean power gains produced by the project for habitat conservation in the San Diego River watershed.
East County Magazine attempted to clarify just how much money that could be, and what types of conservation projects he was speaking about, but Collinsworth did not elaborate.
Likewise, efforts to find out what Karl Strauss is doing and when it intends to break ground were unsuccessful.
O’Donnell said the brewer has five years from the time of its approval, or until December 2020, to start construction. The brewer has yet to submit grading or building plans to the city.
“We’re waiting to see what they submit and go from there,” he said.
At the time it was approved, the project entailed a 7,400 square foot restaurant/ tasting room; a warehouse/distribution building of 46,000 square feet; and some 24,000 square feet of office space. It also included an outdoor beer garden with extensive landscaping, seating and room for outdoor games such as bocci ball and corn hole toss.
The development was intended to replace Karl Strauss’ current main brewery in Pacific Beach, and have a capacity to brew up to 300,000 barrels annually, according to the company.
At the time, Rattner said the new brewery would initially employ about 100 to 150 people, but would eventually grow to about 300 employees.
Karl Strauss, San Diego’s oldest craft brewery, was founded in 1989. It now has 11 brew pubs including recently opened ones in Anaheim, downtown Los Angeles and Universal City Walk in Los Angeles.
According to a 2017 article in Restaurant Business Magazine, Karl Strauss did $39 million in sales in 2016. According to the Brewers Association in Colorado, Karl Strauss was ranked 40th largest craft brewer in the nation based on 2018 revenue, which was not disclosed.