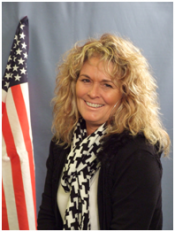 October 8, 2012 (Spring Valley)- Incumbent Karrie Johnston Scully hopes to get re-elected to the San Miguel fire board this November. In an exclusive interview with ECM, she shares her goals which include holding Cal Fire accountable for promises made when the Board voted to outsource services to the state fire agency.

She aims to maintain the highest standard of care for the district. She also wants to ensure that the employees are respected and that they will continue to provide the same level of service with no distractions from Sacramento. She also hopes to decrease the number of directors on the board from seven to five.

Johnston is a native San Diegan and first moved to San Diego over 30 years ago.  She and her husband, Warren, have raised five children, who have all graduated from Valhalla High. She is a retired San Diego Deputy Sherif and has worked at San Diego Police Department and  Heartland Communications Facility Authority as a fire dispatcher. She is currently a supervisor at American Medical Response.

She says that her value has always been to be a good steward and that a representative “needs to represent all constituents.”

She points out that “You will never be safe from [major] fires,” but adds that there are steps you can take to reduce risk. “You can make your property safer each year,” she said, citing cutting weeds as an example. “The more clearing you can do [at] your house, the better you will be.”

For her budget priorities, she noted,“I’m familiar with Cal Fire and that they work. I don’t like Sacramento; I don’t trust them. I want to ensure that we maintain as much control as we need over our district, and not get sucked into the pit hole of Sacramento.”

She has strongly opposed turning over the district’s services to Cal Fire. She added that she and Director [Chris] Brainard were the two ‘no’ votes at the meeting, Tuesday September 25, but decided that in the end, they would vote ‘yes’, knowing the ‘no’ votes couldn’t stop the inevitable and to make the transition smooth.

She also wants readers to know that, “I know people have said we got in this position, into the fiscal crisis [in 2008] due to poor decisions, and that’s not it. We got hit the hardest in our district with inflated home values. We may never recover. We still haven’t seen the end of it. We just didn’t know it was going to be as bad as it was.”

Don't you believe a word of what Karrie Johnston, incumbent SMGFire Board, says. She and her cohorts made horrendous financial mistakes, i.e., the benefit tax/fee election. They screwed it up...did not even follow the advice from the consultant, and yet chastised the public for complaining about their own financial incompetence, and for complaining about one of their biggest mistakes, hiring Augie Ghio and his sidekick, Leonard Villarreal.

And...she never was willing to give up her SMGFire benefit package although as she mentions here she is retired from another public agency, Sheriffs, works for AMR (ambulance provider to SMGFire -who must have some kind of benefit package for their workers)...and she is married to a recently retired El Cajon firefighter (not sure of his rank) who must have benefits.

Over 16 years, the SMGFire Board Directors sucked up $1+million in benefits...just about the amount that took the District down the drain.

Rickards is the other Director up for relection: ditto.

Get rid of them both.

Charlene Ayers has also forwarded evidence that the FPPC is conducting an investigation into Johnston's campaign finances. Here is an FPPC letter confirming the investigation, though the outcome has not yet been determined. Here are documents Ayers submitted to the FPPC listing sources to back her complaint.