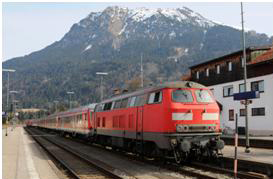 Are you ready for a unique experience? A great train ride might be exactly what you are looking for! Once you're snug in your window seat, you've already begun.

The joy is in the journey itself. There is a feeling of old-fashioned civility that saturates the experience, while the thrills likewise seem to hearken back to another era--a leisurely conversation with a friendly stranger, sipping cocktails in the lounge car, being lulled to sleep by the comforting hum of clickety-clacking.

Children especially love trains (along with subways, trolleys, whatever rolls on wheels), delighting in the chance to roam the aisles instead of being strapped into a car seat. And in some sense, every time that engineer's whistle blows, a playful, childlike wonder bubbles up inside all train lovers, young and old.

Popular train trips in North America often sell out, so it's wise to book two or more months in advance, especially if you're traveling in summer or if you want a sleeper compartment or other special accommodations. You'll start to decompress the moment you're on board, however--luggage stowed, ticket punched and the driving left to someone else.

A few miles removed from New York City, past the traffic-clogged George Washington and Tappan Zee bridges, passengers aboard the Adirondack can gaze out at a pastoral scene that the 19th-century Hudson River School painters would have recognized: densely forested hills, tiny waterfront hamlets and, of course, the broad Hudson River itself. This 10-hour trip might feel as if you're being transported to a foreign land--and you are, for the end of the line is cobblestoned, French-speaking Montreal. En route, you'll puff into stops like Saratoga, the storied Victorian resort town still popular for horse-racing and soothing springs, and Westport, NY, with its handsome, still-functioning 1876 train station that also houses the Depot Theatre, with a backdrop of serene Lake Champlain and, in the distance, Vermont's green mountains. New York to Montreal from $62

When you and your family ride Amtrak's imaginatively named Auto Train from the Washington, D.C., area down to theme-park central near Orlando, FL, here's what you won't have to deal with: I-95 traffic, airport parking, fumbling with a toddler's shoes at airport security, antsy kids struggling to escape their car seats, and lineups at the car-rental counter. You won't even need to forage for food: All meals are included, and one of the five entrees served should satisfy even the pickiest half-pint. With afternoon departures that arrive the next morning, the Auto Train is the equivalent of a red-eye flight--only you get beds, a shower a few steps from your seat, and your own familiar car (and car seats) at journey's end. Lorton, VA, to Sanford, FL; family bedroom for two adults and two children, plus car, $1,104

Best for a Little Bit of Everything

Vast heartland plains; two towering mountain ranges; sun-scorched buttes and canyon lands; stops at towns renowned for everything from skiing (Winter Park, CO) to hot springs (Glenwood Springs, CO) to religion (Salt Lake City, UT) to sin (Reno, NV)--all book-ended by the world-class skylines of Chicago at one end and San Francisco at the other. That mouthful only starts to describe the two-day, 2,400-mile route of the California Zephyr. The journey's literal peak occurs in the Colorado Rockies, where yellow and pink wildflowers speckle grassy meadows in summer. The train doesn't so much climb the Continental Divide as plunge right through it via the six-mile-long Moffat Tunnel, 9,000 feet above sea level. Even more astounding is the path through the Sierra Nevada, where the Zephyr clings to cliff-sides, zigzags up switchbacks and glides through snow sheds that were built to protect the rails from avalanche. Chicago to Emeryville (San Francisco) from $182, roomette for two from $924

Best for a Vintage Experience

A drink might take the edge off after a grueling drive, or make a bad flight bearable. But sipping a Cabernet aboard a train? Well, that's just one more reason train passengers are rarely in a rush to reach their destination. The one-night, 35-hour trip aboard the Coast Starlight meanders through prime grape-growing regions in Oregon and California. For a nominal fee, passengers can enjoy a daily tasting of wines produced along the route--perhaps a Napa Valley Chardonnay or a Pinot Noir by way of Santa Barbara. The setting is the train's refurbished, first-class parlour car, but there's nothing highfalutin about the scene: A table holds self-serve trays of cheese, fruit and crackers, and handwritten descriptions sit atop each of the day's wines. For novices, the car attendant provides a basic sight-smell-taste how-to. Tastings take place every afternoon--perfect timing to buy a bottle (for about $15) and pop the cork for dinner-with-a-view just afterward. Los Angeles to Seattle from $123, roomette for two from $496

Carving a tunnel straight through earth and rock is difficult enough. In order to traverse some particularly hairy contours in the Canadian Rockies, early 1900s engineers dreamed up two enormous tunnels that each curves three-quarters of a circle beneath the surface. The resulting Spiral Tunnels opened to acclaim exactly a century ago, giving the railway a manageable 2 percent grade. Such inspired design was needed to plot a course up, down, through and around some of Canada's most dramatic landscapes, taking in Banff’s glacier-carved peaks, 1,980-foot-deep Fraser Canyon and the awesome surge of water through narrow Hell's Gate gorge. All these are visible from aboard the Kicking Horse route of the Rocky Mountaineer. In a twist on the usual overnight rail journey, passengers on this one-night trip sleep in hotels en route, in the town of Kamloops, rather than on the train--which makes some purists scream heresy, while others cry "Hallelujah." Vancouver to Calgary; one-night package from $959 for two

James J. Hill was the original empire builder, a visionary railway entrepreneur whose original goal was transporting wheat, not people. Hill actually disdained passenger trains, so it's ironic that the northerly rail line he built now carries the nation's most popular long-distance passenger train from Chicago to Seattle. Seen from the Empire Builder's panoramic windows, North Dakota's wide sky and rolling prairies seem endless, while the steep green slopes of Washington's Cascade range appear lifted from fairy tales, especially after you emerge from the eight-mile Cascade Tunnel. But the scenic headliner on this two-night, 46-hour train ride is Montana's Glacier National Park. The Empire Builder skirts a 57-mile "U" alongside Glacier, giving passengers intimate views of the park's soaring limestone crags, gushing rivers and waterfalls, and alpine lakes that glow blue-green.
Chicago to Seattle from $197, roomette for two from $838

Conductors aboard the Alaska Railroad understand that its passengers don't merely want to skip from point A to point B. Their trains never run overnight (how would you take in the scenery?) and have been known to slow down or even stop at the sight of a glacier, a herd of elk, or a bear and her cubs. Unless you're a dogsledder, this train is the best way to access some of Alaska's rawest wilderness. For a breadth of vistas, consider covering two legs. Start with the 3½-hour ride on the Coastal Classic, which runs from the cruise-ship hub of Seward, past waterfalls and bountiful wildlife, to Anchorage. Then take the Denali Star on its 12-hour trip north to Fairbanks via six-million-acre Denali National Park, home to grizzlies, wolves, caribou and North America's tallest peak.

Seward to Anchorage from $75, Anchorage to Fairbanks from $210

There's no denying that Japan's 186-mph bullet trains are amazing. But our picks for one-of-a-kind train experiences around the world demand awesome scenery--which you can drink in, rather than whiz by in a blur--and fantastic locales.

The celebrated alpine resorts of St. Moritz and Zermatt are roughly 100 miles apart as the crow flies, but this is Switzerland: The rail journey requires 7½ hours, 291 bridges and 91 tunnels.

New Zealand's most scenic train slices through broad river valleys and the gorges and
glaciers of the Southern Alps, where the Lord of the Rings trilogy was filmed. The 4½-hour,
coast-to-coast ride can only be described as epic.
Christchurch to Greymouth from $85

Named for the two oceans at either end of the tracks, the Indian Pacific crosses Australia from Perth to Sydney in three nights, past the lush Blue Mountains and otherworldly landscapes. Sleeper cabin from $1,585

A four-day hike is one way to reach the famous ruins at Machu Picchu, Peru. Then there's the Hiram Bingham, a plush ride that includes four-course meals, live music and a tour of the legendary lost citadel. Same-day round trip from Cuzco $588

The Sky Train departs Beijing at 9:30 p.m., bound for the "roof of the world" in Lhasa,Tibet,
two days later. Extra oxygen is pumped into the train cars, and you'll need it.

*prices can’t be guaranteed until ticketed. Estimates only!

Train trips are gaining in popularity for lots of reasons; airline fees, retirees preferring to “take their time” and see the World, and these trips are often the last “unexplored” travel for some adventurers. Trips can sell out quickly, so if you are ready for YOUR train adventure; book ahead through an agency like UNIQUE TRAVEL CONCEPTS.

They will handle all the details, book your trip, arrange visas and passports; provide travel tips and information and get you ready for your next travel experience!

it could be safe if you travel on plane, I bet airphil express has new planes for there clients.