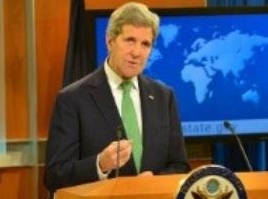 March 20,2016 (San Diego’s East County) — Since 2014, local Iraqi Chaldean leaders have been speaking out and urging the U.S. to take action to halt what they termed “genocide” committed by ISIS against religious minorities including Christians, Yezidis, and others.

On Thursday, Secretary of State John Kerry made a formal declaration that ISIS (also known as ISIL or Daesh) has committed genocide against religious minorities in the Middle East. (View video and full text of his remarks)

Locally the news was welcomed by Mark Arabo with the Minority Humanitarian Foundation, also a leading spokesman  for the Iraqi Chaldean community.  Arabo says he learned of Secretary Kerry’s action in a phone call from Ambassador Saperstein early Thursday morning.  “I picked up the phone and immediately he told me that our organization had `made it happen,’” Arabo says in an e-mail sent to supporters.

He calls the action a “monumental step forward,” adding, “Now we will begin the long road to recovery.” He said the next step for the Minority Humanitarian Foundation will be to introduce comprehensive legislation to protect and serve displaced Christians throughout the region.

Kerry’s formal designation comes days after the House of Representatives passed a resolution unanimously condemning ISIS atrocities as genocide and asking the State Department to issue a declaration.

ISIS has slaughtered Christians, forcing millions to flee their homes or convert to ISIS’ extreme version of Islam. ISIS fighters have also captured, raped and enslaved thousands of Yazidi women and girls, destroying cities, towns and religious symbols such as churches and ancient heritage sites.

The genocide declaration carries with it ethical and legal questions.  A key issue will be whether the designation obligates the U.S. to take actions to stop the genocide. One likely step would be a referral to the United Nations Security Council to prosecute war crimes under the International Criminal Court or another tribunal set up for Iraq and Syria.