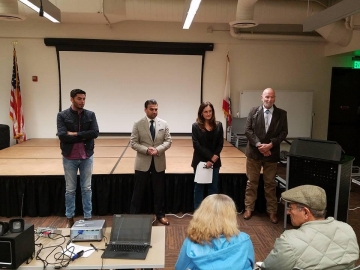 Speakers included Luawanna Hallstrom, a leading voice on California agriculture for more than 25 years as a member of the California Board of Food and Agriculture, co-chair of the American Farm Bureau Labor Committee, and co-chair of the Agricultural Coalition for Immigration Reform.  Another speaker was Warren Bacon, retired as a former Agriculture Standards Inspector for Agriculture Weights and Measures, San Diego County.

Luawanna Hallstrom: “The Farming Community: Immigration, Labor and the Changing Faces of Agriculture”

To understand the changes required for agriculture, Hallstrom said we must first understand the needs and challenges. According to the California Ag Vision report, farm labor is among the top four issues facing farmers today.  Less than 2% of the population feeds 100% of the population. The U.S agriculture work force makes up about 2.5 million workers. California has about 500,000 workers with approximately 75% foreign born and half are unauthorized.

San Diego has the smallest farms—fewer than 10 acres—of any county in the nation and has the 12th largest farm economy. California farms produce 400 specialty crops, which include 2/3 of our country's fruits and nuts and 1/3 of vegetables.

Although agriculture needs are diverse across the country, what's really important is the stabilization of the workforce through a legal presence—work authorization & assurance that workers' families will be okay, Hallstrom said.  The 1986 immigration Reform & Control Act (IRCA) was the last broad reform. Since then, Congress has tried multiple times to offer legislation that attempts to stabilize the workforce, but has not succeeded.

Warren Bacon: “The Farming Community: Water Runoff and Exports and the Changing Faces of Agriculture.”

“We all live downstream.” Bacon pointed out that runoff from one property can pollute others downstream. Our major pollutant is silt or dirt runoff. Best Management Practices for agriculture storm water includes a map of the property that lays out areas of production, material storage, and grade. Most small farmers can create these maps themselves but regulations require civil engineers to sign off on the plans—which can be a financial burden.

Farmers in San Diego County produce $1.75 billion in crops. They are first in the U.S. with avocados, nursery products, and part-time farmers—and our county is number one for women farmers.

In addition, crops go through California, e.g., 77.7 % to Mexico. If NAFTA fails, Mexico—whose middle class is growing—has lined up South American countries to replace what they purchase from the U.S. This could jeopardize $18 billion of agriculture products out of San Diego County.

Sayed also noted that San Diego County has more “small farms” than any other county in the U.S. agriculture production. The food products from these farms plus food processing provide $2.8 billion to our local economy.

NAFTA is another key issue he cited, noting that NAFTA causes loss of jobs and low salaries for workers.

He posed the question: Are issues local, state or federal?

In discussions with farmers in San Diego County, Campa-Najjar said that the themes of water and farm labor emerge as the key issues. Farmers are concerned about the variabilities of climate change. In addition, farm workers need housing and fresh water.

He believes that we should improve NAFTA and offer trade adjustment assistance. More people are being displaced. Only 80 farmers benefitted from the recent tax plan signed into law by President Trump, he said.

Above all, he cited the need to align values. Once we’ve done that, he concluded, we can talk about common sense solutions.