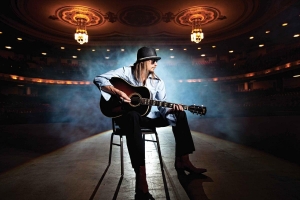 April 20, 2011 (San Diego) Kid Rock has announced the second leg of his "BORN FREE" tour that comes in support of his most recent release, "BORN FREE." The second leg of the tour, featuring Sheryl Crow, will kick off July 2nd in Cincinnati and cross the country hitting amphitheaters over the span of 30 shows.

Tickets are available at LiveNation.com, at select Live Nation and Ticketmaster retail outlets plus via Charge-By-Phone (800.745.3000). Be sure to tell them you heard about their event through East County Magazine!

The tour was launched at a celebration of Kid Rock's 40th Birthday, which took place at Ford Field in Detroit featuring a three-hour show by Kid Rock for 60,000 of his closest friends. "Born Free" has been selling at a quick clip since its release, having been featured across multiple radio formats, video channels, and promotions including a highly successful partnership with TBS during the Major League Baseball Playoffs. Kid Rock recently performed on the "All Together Now" special, featuring all four living US Presidents, which aired on NBC on March 28th and on the most recent installment of the Kennedy Center Honors.

As usual, Kid Rock will be backed by his own Twisted Brown Trucker Band, his constant companions for many years on the road. The tour also features close friend Sheryl Crow. Free-spirited, fearless and fierce, Sheryl Crow has garnered nine Grammys, performed duets with musical luminaries such as Sting and Mick Jagger, released seven studio albums which sold more than 35 million records worldwide, saw the launch of her very own clothing line Bootheel Trading Co., is a cancer survivor and passionate humanitarian and has performed for President Obama. From humble beginnings as a jingle and back-up singer, Crow has reached the pinnacle of professional solo success.

Kid Rock's previous album "Rock 'N Roll Jesus," released in 2007, debuted at #1 and stayed in the charts for 100 weeks, becoming the biggest selling Rock album of 2008. His hit single "All Summer Long" hit #1 in 8 countries and provided Kid Rock the opportunity to expand his huge touring base outside of America. Kid Rock has a unique ability to genre-hop, marking his territory everywhere. He hosted last year's CMT Awards (whose ratings rose 19% over the previous year) and performed at events ranging from the Grammy's to the VMA's, EMA's and CMA's to the Hip Hop Honors. He has performed for and visited troops overseas numerous times, and remains one of entertainments most vocal supporters of our soldiers abroad.

In the past year he has entered into a unique partnership with Jim Beam, while at the same time expanding his philanthropic efforts through his own Kid Rock Foundation.