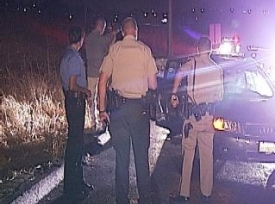 August 18, 2011 (Bonita) – A woman kidnapped on Fairmont Avenue in City Heights was beaten and sexually assaulted before escaping her attacker.  After flagging down motorists, she was found naked along southbound 125 just south of Highway 54 in Bonita around 8:30 last night. Several drivers stopped to help the victim, 21.

“They saw a male dragging the victim up the side of the hill by her hair,” CHP Sergeant Kevin Mensior said, according to ECM news partner 10 News. “By the time they got turned around they were gone or in the process of leaving.”

She was described as distraught and incoherent, the Union-Tribune reported. A be-on-the-lookout report was issued for a a white sport utility vehicle (SUV). According to Mensior, a Hispanic male and a white female were in the vehicle.

California Highway Patrol searched the area and found a lot of blood. The victim has been hospitalized.

Investigators indicate that the woman knew her attacker. “So the community at large does not have to be afraid of being grabbed off the street, sexually assaulted and left naked on the street,” Lieutenant Andra Brown with the San Diego Police Department said, Mount Helix Patch.com reported.

Police will be reviewing toll road cameras along State Route 125 for evidence.