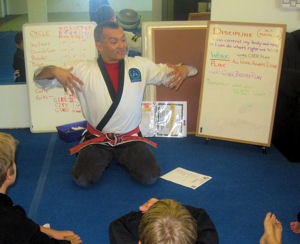 October 6, 2012 (Spring Valley) -- In a class last week, 5th degree black belt martial arts master Scot Conway taught kids different techniques of how to handle physical bullying by showing by example at the Bully-Stop Seminar at the Guardian Academy. Adults learned just by Conway explaining it. ECM participated in a few of the techniques with the kids.

First, Conway handed out a sheet of paper to the parents. The kids lined up in a line across the mat and properly greeted Conway as their sensei (teacher) by clasping their hands and bowing.  Then, the kids gathered in a circle around Conway on the mat. Conway explained that one of the biggest problems of bullying is when parents are in the school office and claims are made that the bully and victim are just friends, that they’re just having fun.

First, the kids were taught to team up with parents, then teachers, and then friends. Kids must talk to grown-ups first even if the kids aren’t sure if it’s bullying or not. A bully may get away with it because no one tells on them. Conway gave an example of how a fifth grade girl was bullying these other kids at the same table by bossing them around. “One girl spoke up and firmly told the bully, ‘That’s not right! Be nice!’ Pretty soon, the rest of the kids joined in and told the bully to stop. The bully realized what happened. If they realize they’re not getting any power, they’ll stop.” 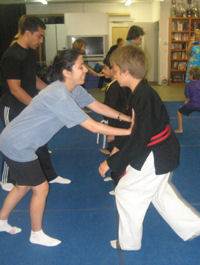 Next, Conway emphasized that kids should say what you DO want. Examples are: “Be nice!, Show respect!, I thought you were more mature than that. You are, aren’t you?” A middle school student would say this last example.

The most common kind of physical bullying is pushing. This is when the kids would learn these techniques by example/actually doing it by themselves and then with their parents. First is ‘bounce back from the fall’ when the bully pushes you from behind. For fall forward, one possible technique, taught by two middle schoolers, is keep your arms bent, fingers together and hands facing forward. Then, you would fall forward. To get up, you would push up and get your knees in.

Conway taught another example by first arms bent and go flat. You would bend forward at the knees to catch yourself. You must put your hands out first, then your knees, then go flat. For fall backward, the two middle schoolers told the other students to balance at the knees first and fall on back. Then, to get up, roll on your side, push up slightly with both hands down, knees in, then stand up. Conway said to keep the arms bent, sit down as fast as you can, but tuck in your chin without bending your head. Then, roll over on your side, get on your knees, and stand up. For super base (your body’s relation to the ground), you learn to keep your balance well. Sink down to control base, drop your hips and twist, and get in a defense stance.

Next, The kids were then taught to use their hands ‘since you have two hands.’ First is the two hand stop. Pop out elbows straight. You’re not hurting the bully; you’re stopping the bully from being too close enough to hit you, to create space. The second most common kind of physical bullying is the headlock. There are two ways to get out of it. There is the two hand brace and unthread, where you create space, tuck in your chin, and get out. Or you use both hands to engage in the two hand triangle frame, where you run your fingers through your hair until your elbows point out at the bully. While looking at the bully, you move your head away.

The least common type of physical bullying is hitting, but it still happens. The basic escape is a simple twist. When a bully grabs and attempts to drag you away to a deserted place, you roll your fingers off the bully’s fingers. Another technique you could do is circle the wrist. You move your hand all the way around and use your other hand to help get out. Or you could also circle the body, where you run to the middle, then beside the bully, and circle out.

To ‘stop the big guy’, Conway used his wife an example. First, you can perform a tight closed guard, where you grab in the bully’s head by the neck and hold tight. Then, you let the bully go by shoving him away. You can do this if the bully is sitting on top of you and you’re laying on the ground, or you can do it standing up. Next is a shin kick. Or you can do a forward blast, where you perform a palm strike by running to the bully and striking your palms at his chest.

The last technique for the kids, and for adults, was an armor technique. Kids can use this when the bully starts to verbally bully them, and they can imagine they have an armor and those mean words just bounce right off of them. The trick is to put on the armor instantly as soon as the child starts hearing the mean words. Some bullies will stop if they see it doesn’t seem to affect their potential victim. Adults can use this in any unpleasant conversation to your boss or if you’re preparing to lecture your child. It helps you to be immune to manipulation.

Next was the adult session. First, the adults learned about the ‘Limitations of Authority’. Some kids may have these saint stories, where they tell the grown-up they got hurt, and this child is thought of as the ‘good’ child or a ‘saint.’ The bully is considered ‘bad.’ If you ask the bully what he did, he may say, “I don’t know.” If one parents calls, the teacher may not be able to do anything if there’s no physical evidence, and the police can only take a report. If many different people, unrelated to each other, call in and tell similar stories, there’s now an accumulation of witnesses. The police can take a report, and the school can tell the child victim to be alert. But if a second child reports on the same bully, the teacher can call in the parents. Now, if the teacher saw the bullying going on and received a few reports, the bully is caught and gets in trouble.

Next, you ‘make the bully’ change by ending their activity (send them home or to their room), control the bully by making them get an escort, and then define/discipline/punish. First define the behavior, then discipline to control the behavior, and then punishment by paying a price if the bully does it again. The trick is to make the bully lose power and let the victim gain power. The worst-case scenario is if your kid becomes a bully. The second worse case scenario is when your kid is bullied.

Then, the adults learned about ‘SEAL- Stop, Examine, Ask, Lock.’ First, you stop your emotions from getting out of control when it starts to come. Second, examine and look at the facts you know. Then, ask and clarify the fact gaps. At this point, you are wondering ‘what else happened?’. Finally, define behavior, even if no one has admitted to actually doing it, and get to an agreement that it is wrong. Just get right to the solution. This also helps for adults if you are firing an employee, but you’re firing the behaviors. You admit that you did something wrong, you come to an agreement that the behavior is wrong. By taking responsibility for your actions and promising never to do it again, you may get a new job out of it. 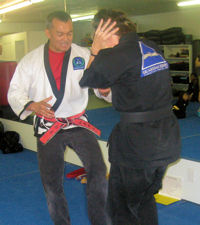 Finally, the adults learned C-SEA- Concede, Suggest, Establish, and Ask. First, concede that the view is understandable. Listen well enough to understand where they’re coming from, even if you disagree. It’s about knowing why they think they’re right. Next, suggest that others may have a different view of the same thing. Establish that those views are logical. Then, you ask if you can agree and you understand that they have their reasons. Conway pointed out, “I think it’s arrogant to say someone else is wrong if you haven’t heard their side.” At a simple level, for kids, you are establishing negative consequences for negative behavior. At a sophisticated level, for adults, if they think they’re being cool or funny (‘negative humor’), than those who are cooler or funnier don’t get it, and it doesn’t make you look good.

The kids then bowed to their teacher to end the session. The whole goal of this seminar was to “stop bullying without a fight if we can.” Julia Flood, whose son attends the Guardian Academy, explained that two weeks ago at this place, there was a two and a half hour self discipline class for women that she attended. Flood has known Conway for a long time and loves how he teaches, with words and examples. “Everyone thinks that karate is all about fighting.” But, every few months, the kids learn something new. For example, right now, they are learning about discipline, and they do projects. Conway also teaches bullying sessions at schools and talks at school assemblies, “an extension of what he does here.”

For more information on the Guardian Academy, go to: http://www.guardianacademy.com/Guardian_Academy/GQDojo.html