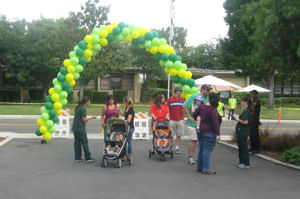 As the children arrived, they and their families checked in with student nurses from Sharp’s Grossmont Hospital and received a free goodie bag. There were about 50 exhibit booths offering free services for the kids. Volunteers from many businesses set up booths which included free books, dentistry, doctors, chiropractor, the Union Tribune, fire and police departments, the San Diego County library/La Mesa branch, mentoring programs, YMCA, and even astro and bungee jumps, plus pony rides.

A free lunch was provided to the kids by volunteers from the La Mesa United Methodist Church.

Debbie McElvary, president of the Board of Directors and a pharmacy manager at Costco, handed out flu shots, which was started at last year’s event, to those in need and agreed to an interview.  “I get the board to pay for the flu shots and I hand them out for free, “ she told ECM. 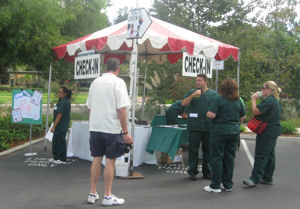 This event was started “by the board of the district to give back to the community and meet the health care needs of the district,” she explained. It was called ‘Kidscare Fest’ because “It’s directed to the children of our district. We have a lot of people in East County that don’t have health insurance, and kids are victims. There are health care screenings etc.”

The number of kids that come each year increase each year, and over 1,000 were expected for this event. It takes place in September because “it’s back to school and children are being in need of screenings before they got to school. We bring up healthy eating; childhood obesity is such a problem. Several years ago, we collaborated with the district and many businesses to have this event here.”

It takes a full year to plan out the event, she concluded. “As soon as the event is over for the year, we start planning for next year. We have many people, volunteers, that help us put it together.”