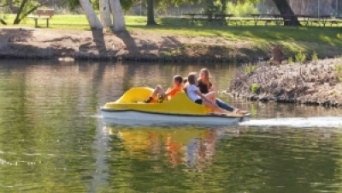 April 17, 2017 (Santee) – Santee Lakes is an idyllic place to let kids enjoy the simple pleasures of childhood.  On a sunny afternoon over spring break, kids at the lakes gleefully discovered their inner Tom Sawyer or Becky Thatcher.

I spotted a group of kids piloting a pedal boat around one of several islands in the lake.   A large Canada Goose skidded to a water landing in front of another pedal boat, where a startled dad snapped photos while his kids looked on, pointing with delight. 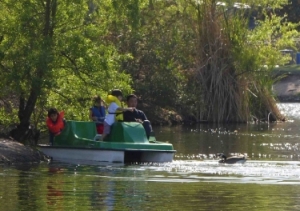 The goose is one of 175 bird species that can be found at this birdwatcher’s paradise. Others include herons, egrets, wood ducks, mallards, song birds and more. You may also seeturtles, raccoons and other wildlife. 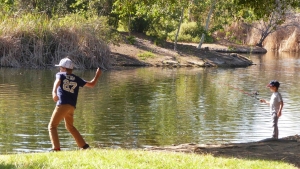 On shore, a young boy tried his hand at fishing, learning the value of patience. Nearby, an older boy skipped rocks across the rippling water’s surface.

On a walkway beside the lake, a girl on a bicycle rode past, steering with one hand as she licked a dripping ice cream cone. 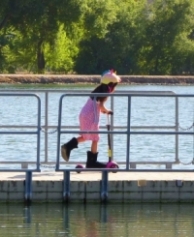 Next came a  pair of moms wheeling strollers,  starting the next generation off  with a Santee Lakes visit early in life. 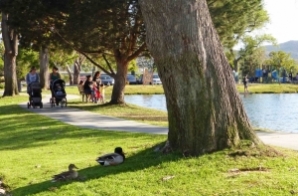 Other families wheeled around in a bicycle built for four with a canopied top – a modern-day version of a surrey with the fringe on top.

The lakes have many hidden finds, from fort-like playground gear to climb on to gazebos, horseshoe pits and more. There’s also a swimming pool for campers to use, a  general store,  recreation center, canoe and kayak rentals.

Further down,  a little girl on a razor scooter, wearing a pink dress and dinosaur hat, pushed off with over-sized boots, gliding toward floating cabins.

More kids in a pedal boat pulled up to cabins on the shoreline, where a family with a large dog had staked out a canopy on a wooden lakeview deck. 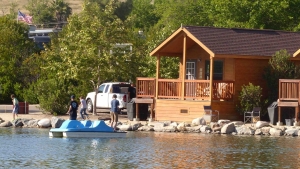 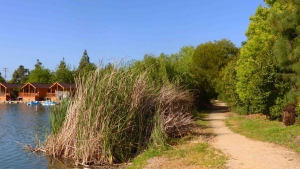 At the campground beyond, aromas of barbecues and wood smoke from campfires wafted in the air, as children kicked balls around nearby and scrambled along pathways through thickets of rushes and trees arcing overhead.  The lake has mostly RV camping, but there are a limited number of tent campsites available by reservation.

Near the park’s entry/exit,  more youngsters frolicked in a splash park complete with spray jets of water to run through and buckets  poised to douse gleefully squealing children from overhead.  View video: https://www.youtube.com/watch?v=Za1bE4bCIug&feature=youtu.be 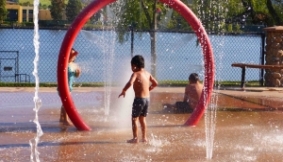 Santee Lakes is owned by Padre Dam Municipal Water District, and were originally created to showcase recycled water for recreational purposes. But for the families who come from all across the U.S. and even abroad to experience Santee Lakes, it’s all about having fun, enjoying nature, and spending quality time together.

These are the simple pleasures many of us remember from our own childhoods, when the pace of life was slower, long before the advent of video games, cell phones and computers mesmerized kids’ and drew them into a fast-paced world of animated make-believe and all-too-real images on social media.

The kids at Santee Lakes, by contrast, seem blissfully content to while away an afternoon exploring paths and islands, pedaling boats and bikes, or simply standing in a shady cove, waiting for a fish to bite.

You can plan your own Santee Lakes adventure by visiting www.SanteeLakes.com. 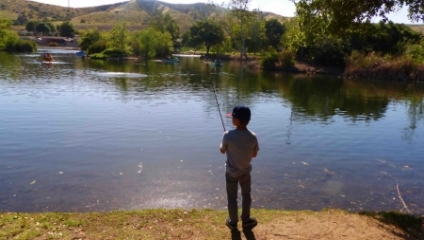