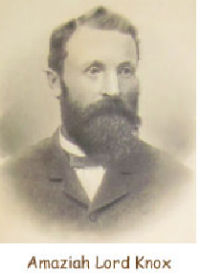 Employed by Isaac Lankershim, Knox was hired to manage the planting of wheat and to build a ranch house for Lankershim. For his services, Lankershim paid Knox a salary and his choice of ten acres. The land, Knox chose lay where the road from San Diego turned toward Lakeside.

El Cajon was located half-way between Julian and the growing city of San Diego when gold was discovered in Julian. Knox recognized the need for a hotel and Knox’s ten acres was an ideal spot for teamsters, miners, and drovers to tay overnight. With the number of travelers booming in 1876, Knox built his hotel and some corrals for $1,000. So successful was the hotel that the bend in the road became known as Knox’s Corners. Knox erected a seven-room building as a combination residence and hotel on the southwest corner in 1876.

Originally a two-story, seven-room structure serving as Knox's residence and hotel, it soon boasted an add-on dining room for guests on the east side. The parlor area was the first post office and Mr. Knox was the postmaster for 90 residents. The original building became the house of Mr. and Mrs. Knox and their four children while they ran a 24 room hotel.