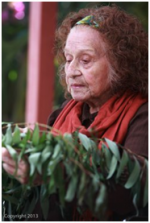 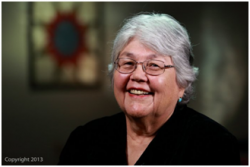 Jane Dumas is a member of the Jamul band of Kumeyaay Indians and founder of the San Diego American Indian health center. Ms. Dumas has been a board member for the Indian human resource center since 1986. she has supported the American Indian tobacco education network (AITEN), the California Indian Basketweavers association (CIBA), the California Indian Storytellers Association (CISA), and is an active master speaker for the advocates for indigenous California Language Survival (CLS). in 2002, she was inducted into the San Diego county woman's hall of fame and on April 28, 2012, the city of San Diego honored her by proclaiming it Jane Dumas day.

Dumas, a tribal elder honored as a 2013 American Indian heritage month local hero, is a member of the Jamul band of Kumeyaay Indians in East County. She has spent a lifetime teaching, leading and advocating for the American Indian community of San Diego, always emphasizing the value and importance of traditional language and history in today's urban and American Indian societies. she’s made it her lifelong mission to teach the language of the Kumeyaay people to American Indians and non-Indians alike, and to share the healing powers of native plants.  http://www.kumeyaay.com/all-news/3271-kumeyaay-elder-jane-dumas-keeps-language-plant-lore-alive.html

Rose Margaret Orrantia is the program manager at the academy for professional excellence’s tribal star program at San Diego State University, which aids Native American foster youth in their transitions to adulthood. Ms. Orrantia has served as the executive director of Indian child and family services (ICFS), a state licensed foster family and adoption agency serving the American Indian population in San Diego and Riverside. She participated in a movement of Native American social workers advocating for changes in the foster care system that helped shape what became the Indian child welfare act passed in 1978. Ms. Orrantia has a bachelor’s degree in English and a master’s degree in counselor education.

In 2012 Native American children’s advocate Rose Margaret Orrantia, former executive director of Indian child and family services, was presented the George D. Nickel award for her commitment to the advancement of social welfare

“KPBS has the pleasure of partnering with union bank to celebrate these outstanding local heroes,” said KPBS general manager Tom Karlo. “KPBS is proud to feature these honorees in our programming as they inspire us and make a positive difference in our neighborhoods and the world.”  http://sowkweb.usc.edu/news/california-social-welfare-archives-honors-champion-native-americans