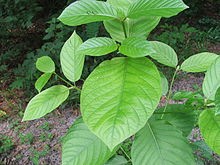 March 3, 2018 (San Diego) – Forty cases of salmonella nationwide, including at least one in San Diego, have been linked to kratom, a banned herbal supplement from Asia, according to the Centers for Disease Control and Prevention (CDC).  Kratom is also sometimes marketed as Thang, Kakuam, Thom, Ketom, and Biak.

Kratom, a stimulant derived from a tree in the coffee family, is used by some as a substitute for opioids and by others as a recreational drug, according to San Diego County health officials. Kratom should not be consumed in any form, three federal agencies warn – the CDC, Health and Human Services Agency (HHSA) and U.S. Food and Drug Administration (FDA).

Importing kratom into the U.S. has been illegal since 2014, however some products remain for sale to unwary consumers. At least some of those sickened by salmonella had purchased the tainted kratom online. Kratom has also been banned by the City of San Diego including sale, possession and distribution.

The substance is sold in capsules, as a tea, and in chewable and smokable forms, according to the CDC, and has also resulted in numerous cases reported to poison control centers.

As of Friday, 14 of the 40 patients sickened by the salmonella outbreak in 27 states have been hospitalized. Though none have died in the current outbreak of contaminated kratom, 10 deaths have occurred since 2014 that were linked to mitragynine, an active ingredient in the herbal product.

Update March 8, 2018:  The Chapman Action Network, an industry advocacy group, has issued a statement questioning the CDC conclusion that Kratom is behind the recent salmonella outbreak. The statement notes that no deaths related solely to Kratom itself have occurred, and questions why lettuce linked to far more salmonella cases has not been treated in the same manner as kratom.

in both food and supplement industries. I'm not sure how harmful this plant is by itself; the cases in the news seem to have mainly been products that were adulterated or contaminated.  Another good reason to buy products made in America or at least sold by reputable pharmacies, health food stores or other retailers -- not fly by night Internet outfits centered overseas with zero accountability.

It's become another plant which can be beneficial that many have found a way to get high on.

Yeah, that's a cure for addiction. Fund more information and treatment programs for your tired, your poor.....