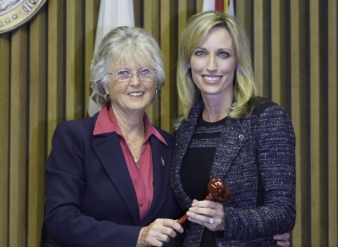 January 9, 2018 (San Diego) - Supervisor Kristin Gaspar was unanimously voted chairwoman of the San Diego County Board of Supervisors for 2018 on Tuesday. The Board also named Supervisor Dianne Jacob to serve as vice chairwoman and Supervisor Greg Cox as chairman pro tem.

Gaspar accepted the gavel from Jacob, who served as chairwoman in 2017.

This was the sixth time Jacob served as chair of the board of supervisors. She outlined several accomplishments in the past year, including adding muscle to rural fire and emergency services; making it possible for residents to report potholes, price gouging and other non-emergency problems through the Tell Us Now smartphone app; and giving more students access to a camp that works to improve relations between teens and law enforcement.

She praised her staff and the County’s 17,000 employees for their efforts during the year.

“You’re only as good as the people who work for you and I’m blessed with an outstanding team,” Jacob said. “…I’m starting my 26th year in this job and serving as your representative over the years has been my greatest honor.”

As new chairwoman, Gaspar will outline the County’s 2018 goals at the annual State of the County address on Feb. 27 at the Scripps Seaside Forum in La Jolla.