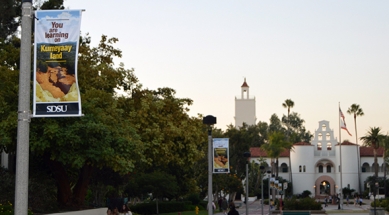 November 6, 2019 (San Diego) - The SDSU Kumeyaay Land Acknowledgement has been formally approved and will be adopted as part of ceremonial introductions at key campus events, as written statements on university web pages, and to encourage initiatives that bolster academic, professional and other support for students, faculty and staff.

Unanimously approved by the University Senate in September, the resolution formally acknowledges that SDSU resides on land not officially ceded, and that has been home to the Kumeyaay people for more than 10,000 years.

“The public acknowledgment serves to honor and respect Indigenous peoples and their connections to the land while also clarifying that SDSU resides on Kumeyaay land,” said SDSU Chief Diversity Officer J. Luke Wood. A majority of central, southern and east San Diego County is Kumeyaay territory; most of North County is Luiseño traditional homelands.
“This is our way, as a campus community, of showing both gratitude and appreciation for those to which this land belongs, and also encourages us to broaden our knowledge and awareness of Indigenous and Native peoples,” Wood said.
Written by Michael Connolly Miskwish (Kumeyaay), a Kumeyaay historian, researcher and assistant professor of American Indian Studies at SDSU, the acknowledgment is an initiative of Miskwish’s home department. The full and abbreviated versions of the acknowledgment are available online.
The Land Acknowledgment also commits SDSU to recruit and retain college-ready Kumeyaay students and to nurture positive relationships with Kumeyaay peoples.
“Land acknowledgments honor and respect contemporary Indigenous peoples and their connections to their traditional territories. From Indigenous point of view, it’s important for people to know about the deep histories of the lands on which they reside and work,” said Olivia Chilcote (Luiseño), an assistant professor of American Indian Studies.
“Land acknowledgments also build awareness around the ongoing structures of colonialism and how colonization dispossessed Indigenous peoples of their lands. Some people also view land acknowledgments as part of a process of decolonization (giving land back and shifting focus away from dominant society to re-center Indigenous peoples and perspectives),” Chilcote said.
Chilcote said much action must happen beyond the acknowledgments, notably to improve the lives of Native and Indigenous peoples.
SDSU community members are encouraged to read the full or abbreviated versions of the acknowledgment prior to the start of events and ceremonies and include in their email signatures: Indigenous Residence: Kumeyaay/Indigenous land borrowing/occupying: The Kumeyaay.
Community members can also rely on resources found at https://native-land.ca/, a database that recognizes the traditional territories across North and South America as well as Australia and New Zealand.
Also, new this year, SDSU will present the Native Truth and Healing: California Genocide Conference, to be held Nov. 21-24. The conference includes presentations, music, documentary films, and political action sessions. Registration is open online, and the event is free and open to the public.
Additionally, SDSU is preparing to introduce a Native American Academic Resource Center to offer curricular and co-curricular support to Native and Indigenous students.
Skylar Beasley (Kumeyaay), a second-year American Indian Studies major who spoke in support of the decision during the University Senate meeting, said the resolution provides needed acknowledgment to Native and Indigenous peoples.
“The resolution being submitted today marks a new chapter in our campus’ history. It gives the Native community hope that SDSU will sincerely honor the Indigenous peoples of San Diego County and bring visibility to Indigenous students, faculty, and staff on campus,” said Beasley, who is from the Sycuan Band of the Kumeyaay Nation.
Beasley, also secretary for the Native American Student Alliance, said the resolution is one among many steps necessary to help ensure that Indigenous students, faculty and staff are both acknowledged and can feel welcome on campus.
“This resolution is a start, but it is not the end-all answer to our campus issues,” she said. “We are optimistic for this dialogue to continue.”