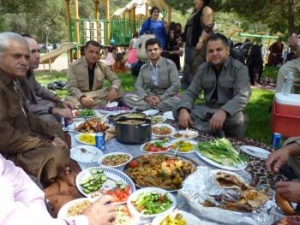 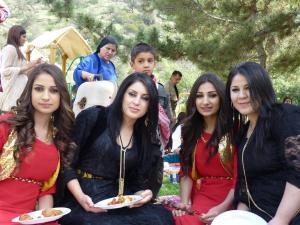 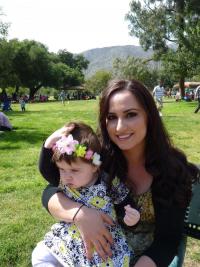 At the event there were people dressed in ethnic Kurdish garb, with Kurdish dancing and a picnic where families sat on blankets beneath shaded oak trees.  These beautiful people were hospitable and warm, inviting us to share in delicious foods. They passed around a variety of Kurdish dishes, from Biryani, Persian-spiced rice to flavorful chicken and lamb kebabs to dolmas, or stuffed grape leaves served up with Naan bread.

.The men we met were professionals in Kurdistan. Doctors, teachers, lawyers and writers.   Most everyone spoke at least two languages and some three – Kurdish, Turkish and English for instance.  Kurdish dancers also performed.

Some of the people left Kurdistan soon after Saddam, the tyrant of Iraq, launched a chemical attack on the Kurds in Kurdistan on March 16, 1988 in an act of genocide. The attack killed 3,500 to 5,000 people, injuring thousands more.

For many, the road from the Middle East to East County was not an easy path.

Shireen Suleman, who came to America soon after the attack, recalled her family’s flight from Kurdistan in 1988 after Saddam Hussein gassed the Kurds. 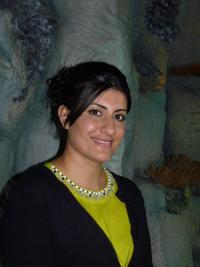 “If we did not flee our village to go into the caves, we would have been gassed,” she recalled. “I remember living in caves, my mother having a baby in a cave.”

Later her family wound up in a refugee camp before coming to America.

“My kids are Kurdish; they were born here,” she told East County Magazine, adding that “thousands and thousands” of Kurdish people now call East County home.

Unlike the Middle East, which is fraught with ethnic and religious conflicts, here in America Suleman said, “We get along with everyone.”

Kurdistan has emerged as an autonomous entity with its own local government and parliament.

“We wanted to be a country for many years,” Suleman reflected, adding that after the attacks, the Kurdish people resolved, “If Saddam didn’t kill us he would make us stronger.” 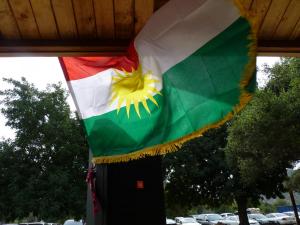