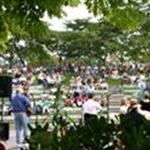 This year’s concerts through the decades will honor the centennial

This year four additional concerts have been added and each concert will celebrate one of the ten decades from 1912 to 2012.

Here is this year’s concert lineup: