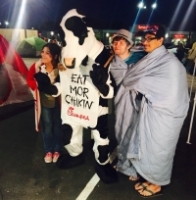 June 15, 2017 (La Mesa) -- Franchise owner Rick Preciado will open the La Mesa Chick-fil-A restaurant on June 22, bringing 100 new jobs and the chance for the first 100 eligible adults to win free Chick-fil-A for a year while also packaging 10,000 meals for the hungry as they count down to the opening.

The grand opening events at the new restaurant located at 8200 Parkway Drive will officially get under way on June 21. A family friendly overnight “First 100 party” will pop up in the restaurant parking lot 24 hours before the grand opening as guests try to be one of the first 100 adults through the door to win a year of free Chick-fil-A meals. This community event is open to guests residing in specific zip codes surrounding the restaurant. A list of eligible zip codes and rules can be found at https://thechickenwire.chick-fil-a.com/News/Future-Openings.

A tradition going back more than 13 years, Chick-fil-A’s First 100 celebration has given away more than $31 million through 2016 and continues to be the chain’s signature grand opening event. Rain, snow and extreme temperatures below

zero or above 100 do not deter Chick-fil-A fans who arrive with tents, chairs, TVs and computers.

Each participant hopes to win a digital offer card loaded with a one-year supply of free Chick-fil-A meals (52 meals with each consisting of a Chick-fil-A Chicken Sandwich, medium Waffle Potato Fries and a medium beverage) that will be awarded to the first 100 eligible adults - ages 18 and older with identification - in line when doors open around 6 a.m. on June 22. If more than 100 people are onsite when the line officially begins at 6 a.m. on June 21, a drawing will be held to randomly select the First 100. Those chosen will be required to camp out until the grand opening in order to secure their spot. Participants will have the opportunity to package 10,000 meals during the promotion, which will be given to a local charity.

Preciado was born in the Panama Canal Zone while his father was in the U.S. Army. Preciado went on to graduate from the U.S. Military Academy at West Point and then spent 20 years as an operations executive at various oil and gas, building materials and chemical companies. Throughout his successful career, Preciado harbored dreams of one day owning his own business and was intrigued by Chick-fil-A’s franchise owner opportunity. Preciado was drawn to the chain’s focus on values, mentoring team members and having a positive impact on the surrounding community, according to a press release sent by Chick-fil-A.

Becoming a Chick-fil-A Operator is no small feat with the company receiving some 24,000 applications yearly for approximately 100 franchise opportunities. Preciado applied and waited a year before being named the first Hispanic Operator in the San Diego area with his Grossmont Chick-fil-A location in La Mesa. His parents and siblings live in the San Diego area and after visiting countless times, Preciado came to think of San Diego as a second home. Preciado, his wife and three children are thrilled to put down roots in a city they’ve enjoyed for so long.

“It’s always been my desire to be a part of a community where I could create jobs, invest in youth, and be a positive influence to everyone I come in contact with,” said Preciado.

Preciado also is inviting his customers to celebrate the new location by participating in a children’s book Wednesday and Thursday of grand opening week. The donated books will be placed in a nearly 3-foot Book House, built from reclaimed wood, to serve as a free library exchange at a local organization. Since 2014, Chick-fil-A has collected more than 41,177 books which have been donated to 241 local organizations in 43 states and Washington, D.C.

More information about the new restaurant can be found at  http://www.facebook.com/cfagrossmont.

Atlanta-based Chick-fil-A, Inc. is a family owned and privately held restaurant company founded in 1967 by S. Truett Cathy. Known for its original chicken sandwich, Chick-fil-A serves freshly prepared food in over 2,173 restaurants in 46 states and Washington, D.C. Chick-fil-A system sales reached nearly $8 billion in 2016, which marks 49 consecutive years of sales growth. In 2017, Chick-fil-A received the top score among fast food brands and one of the top 10 scores overall for customer experience in the Temkin Experience Ratings survey. In 2016, Chick-fil-A was named the Technomic Consumer’s Choice for “providing value through service,” named the “the most polite restaurant in the country” in QSR Magazine’s annual drive-thru report and was the only restaurant brand named to the Top 10 “Best Companies to Work For” by 24/7 Wall Street. More information on Chick-fil-A is available at www.chick-fil-a.com.