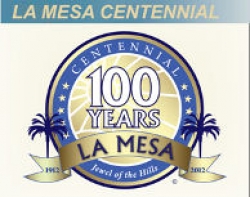 January 24, 2012 (La Mesa)—Gearing up for the city’s year-long centennial celebration, 2012 promises to be “a very busy, festive and memorable year,” said La Mesa Mayor Art Madrid during tonight’s State of the City address.

Major revitalization improvements will also take place in the downtown village this year--changes that the Mayor believes will transform the area into a destination for visitors countywide as well as a magnet for new businesses.

“It will become a thriving, walkable community with a charm that will make the “Village” the brightest gem on our “Jewel of the Hills” crown,” he predicted.

Madrid cited the community’s shift from an agricultural town to an urban village, praising the values and traditions passed down through generations of La Mesa residents from pioneer days to the modern era.

At a time when many cities have faced financial turbulence, La Mesa has maintained a balanced budget and increased its reserves. The Mayor praised councilmembers, city management and staff, as well as residents who approved a sales tax initiative that prevented cuts in public safety. Consolidation of fire management services with neighboring cities has reduced costs significantly, he added.

Both the city and the redevelopment agency had clean audits, he reported, adding that a citywide survey found that 89% of La Mesa residents said their quality of life was excellent or good and 90% said they were satisfied with services received. The mayor also touted numerous awards won by the city in the past year and success at writing grants that fund—including a recent grant to start a community garden at Helix Charter High School.

Despite a recent spate of crimes, the overall crime rate in La Mesa went down significantly from 2010 to 2011—including a 26% fall in property crimes, a 28% drop in theft, 27% in residential burglary, 17% in auto theft, and a hefty 45% drop in vehicle burglaries.

The Mayor warned, however, that actions by Congress and the state Legislature could have detrimental effects on La Mesa residents in the future. He named two examples: elimination of redevelopment agencies by Sacramento and continued decrease in federal community development block grant funding from Washington D.C.

But overall, he concluded, “La Mesa’s future remains bright because we dare to dream big.”
In other action, council voted 4-0 to approve a composting program. (Councilman David Allan was absent due to the death of his father.) The City will provide subsidies for residents to buy composting bins at a discount, a move to foster increased urban gardening. La Mesa EDCO will partner with the city to offer free composing workshops. A “Guide to Backyard Composting” flyer is now available at La Mesa City Hall.

“It’s a win for everyone involved, less garbage to be picked p, better soil for the owners of the bins, and greater carbon sequestration overall for the city of La Mesa,” said Patrick Dean, the San Diego U-T reported. “I’ll be the first in line!”

During the meeting, 23 Citizens of the Year for 2011 were also honored for their service to the community: