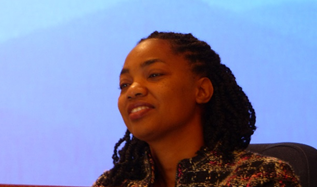 By Miriam Raftery
Photo: Councilmember Akilah Weber led efforts to establish the police oversight body
October 25, 2020 (La Mesa) – By a 3-2 vote on Oct. 13, the La Mesa City Council approved creation of a Community Police Oversight Board. The board is empowered to retain an independent police auditor and to direct investigation of serious incidents involving police, such as shootings or major misconduct complaints.

Jack Shu, who served on the city’s Citizen Public Safety Oversight Task Force, called the action “a historic moment,” adding, “This is a major step in helping the Police Department build trust with the community. La Mesa is leading and showing the way for other cities and law enforcement agencies to step away from old models of giving Police Chiefs complete oversight responsibility…With regards to police accountability, transparency, community involvement and building trust, this is a turning point.”

Vice Mayor Akilah Weber made the motion to approve the police oversight board.  Mayor Mark Arapostathis amended the motion to add $50,000 in funding.  Councilman Colin Parent joined with them to pass the measure.
Councilmembers Bill Baber and Kristine Alessio, both attorneys, sought to delay the action by a month to avoid potential litigation after a lawyer for the La Mesa Police Officers Association sent letters to the city requesting a meet-and-confer process to allow the police officers’ union to suggest changes. The union did not object to formation of the board itself. The union argued that the ordinance would have a “significant and adverse effect on the wages, hours, or working conditions” of officers.  But the city attorney disagreed, since the board’s actions will be advisory only.
Baber received donations and endorsement from the LMPOA in his last election. The union had endorsed both Alessio and Parent in this November’s election, but promptly withdrew their endorsement of Parent the day after his vote for the oversight board.
Calls for a citizens’ police oversight board began five years ago, when the San Diego County Grand Jury recommended that La Mesa and other cities form police review boards. In La Mesa, the pressure intensified in January 2018, after a video of a La Mesa Police officer slamming a handcuffed Helix High School student to the ground went video. The city commissioned an independent report on the incident, but the city council was flummoxed to learn that only the police chief would be allowed to read it, ostensibly due to restrictions in state law. The officer in that incident was removed from serving as a school safety officer and the city paid a settlement out to the student after she sued the city.
The city formed the task force to begin examining models of police oversight elsewhere, with help from a consulting company with experience in the matter.  Before that process was completed, however, a video of a white La Mesa Police officer’s controversial stop of Amaurie Johnson, a black man, near a trolley station, went viral. The incident was widely perceived as racial profiling and an assault charge against Johnson was dropped after body cam footage failed to back up the officer’s claim. The officer no longer works for LMPD; Johnson has filed a claim against the city.
The trolley stop incident occurred just two days before a major protest in La Mesa over national racial justice and police use-of-force protests in the wake of the George Floyd killing by a Minneapolis police officer. The May 30 protest in La Mesa ended in a night of destructive looting and rioting, including the burning down of three buildings.
The new Community Police Oversight Board will be composed of 11 citizens including one from each of the four police beat areas, the business community, the faith-based community, the La Mesa-Spring Valley School District, a designee of Helix Charter High School, at least one adult under age 30 and another age 62 or older, and one advocate for the homeless or those with those with substance abuse or mental health issues. The board will not include any current or recent law enforcement members or their close family members.
Members will be appointed by the mayor in consultation with at least one other councilmember and approved by a full council vote.
“With respect to police accountability, transparency, community involvement and building trust, this is a turning point,” Shu concludes.

It took five years to do something fairly obvious. Police are losing credibility in our society in no small part because there is constant resistance to implementing reforms which would tend to rebuild trust between law enforcement and the communities they serve. The longer it takes to implement trust, the more likely defunding becomes. That is something for police unions and city councils to think about: taxpayers. The longer reforms to use of force policies are delayed, and as long as there is not a move toward de-escalation training, community policing, and community oversight, the more questions there will be about why we have a class of public employees who can retire at 55 with $150,000+ pensions. (And then take a job with a rural sheriffs department in a different state and add a second pension!) People are not going to keep paying for a broken service, however much policing is needed. I'm not in favor of abolition or even pay cuts, but I totally understand why the public is souring on their police. A person pointing a vape pen (Alfred Olango) or holding a cell phone (Stephan Clark) or sleeping in her bed (Breonna Taylor) should never be shot to death, no matter what. We pay police well to take on the risk, but if they are not willing to accept that risk, and insist on shoot-if-you-are-afraid deadly force polices, then they need to give up the hazard differential. Simple as that. If police are not willing to accept the dangers, then they don't deserve the middle class salaries. And my sense is, that would be a bad world too.