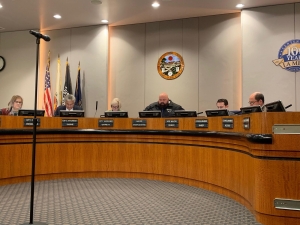 By Allan Acevedo
February 28, 2019 (La Mesa) – With a packed agenda, the La Mesa City Council addressed concerns of increased homelessness, the ongoing housing crisis, and the City’s action plan to meet 2020 and 2035 greenhouse gas reduction goals.
Granny flats and junior accessory dwellings
Commonly referred to as “granny flats,” accessory dwelling units (ADUs) and junior accessory dwelling units (JADUs) were the hot topics of this Council meeting. The meeting drew in myriad speakers, most in support of two ordinances seeking to provide additional affordable housing options and address the housing supply and affordability crisis in California and La Mesa.
In recent years, the California State Legislature has implemented a series of laws aimed at expanding housing options across the state’s notoriously tight housing market. As a result of these new laws, La Mesa’s local ordinance on this subject was nullified last year. Since then, La Mesa has operated under state law in regard to ADUs.
State laws on ADUs (defined as independent, complete living facilities located on the same parcel as a primary, single-family dwelling)  allow for attached and detached units. Municipalities are given flexibility in developing a local ordinance, subject to several requirements. Conversely, laws regarding JADUs (defined as small accessory dwelling units located entirely within the walls of an existing single-family dwelling located in a single-family zone) provide little room for departure from the state’s framework. These developments are not subject to CEQA (California Environmental Quality Act) review, per Council documents.
Mayor Mark Arapostathis stressed the need for “granny flats” for both family members and people interested in renting units. Despite seemingly near-universal support from the Council and speakers, however, there were several points of contention.
Councilmember Bill Baber emphasized that per state law, parking could not be required for any units developed within a half mile of public transportation. His review of the attached map indicating areas subject to exclusion from additional parking showed a case where “the exception swallowed the rule.” In fact, most of Law Mesa residents live within a half mile of public transit. However, it was noted that any change to bus routes would impact this rule. Council ultimately voted in favor of changing the language of the ordinance to except the city as a whole from the additional parking requirements. 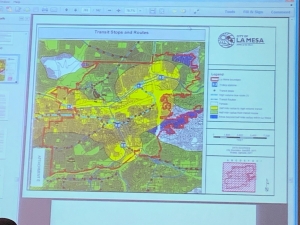 Photo, right:  Areas in blue along the northeastern and southeastern perimeter of the City would have been the only areas subject to additional parking
Realtor Sarah Carlson spoke in favor of the ordinances as written, indicating that “unemployment is down, and homelessness is up.” Her experience in real estate showed that the “young and elderly are looking for housing.” Despite other efforts by the County and State, Carlson indicated this was a great “right now solution.”
Deborah Norwood Ruane spoke representing Housing You Matters, a nonpartisan coalition working to make homes at all price points more economically feasible to develop. Norwood Ruane supported both ordinances commenting on the “alignment with revitalization and creating safer homes.” She stressed that these ancillary housing united would provide options for “students, seniors, and [In-Home Support Service] workers.”
Barrett Tetlow also supported the ordinances but cautioned the Council on the barriers to accessing these additional housing tools: “Regulations, fees, and design and construction costs,” Tetlow said, were the biggest barriers to development. Regulations, he stressed, were addressed through implementation of the proposed ordinances, but suggested fees be waived to help reduce costs to homeowners. Tetlow also praised the City of Encinitas’ “permit-ready ADUs” as a model for La Mesa to consider.
Another resident, Aaron Amerling, expressed general support for the ordinances but worried about the discretionary aspects of the ordinance where the Council could have been more restrictive. He cited two concerns: the lack of an owner occupancy requirement and the lack of rental length requirements. Amerling worried about a “mini-dorm” scenario where investors would “exploit” the new rules and “come in to build units and turn it into an AirBnB.”
Resident Richard Hammett was also generally supportive of the ordinances. Though, he expressed multiple concerns ranging from “marijuana smoke, noise, and parking issues.”
Councilmember Akilah Weber echoed concerns over the lack of an owner occupancy requirement. Weber indicated renters might be displaced from their unit or suffer a change in their quality of life by an owner-investor who decided to build an ADU in a property’s backyard. Vice Mayor Colin Parent, who served on the subcommittee which drafted the ordinance, indicated the homeowner occupancy requirement was excluded to encourage the development of these type of units. Parent noted that only about a dozen rentals in La Mesa were currently listed on the popular online rental service AirBnB. Despite the concern about displacement, Parent did not think this would be an issue in La Mesa, but added that Council could revisit the matter periodically and make changes to the rules as needed. Weber stressed her misgivings again, citing her work as a physician, which prioritizes preventative solutions.
Parent explained that a homeowner occupancy requirement would exist permanently, such that if a homeowner later moved, he would be barred from renting any developed ADU or JADU.
Both ordinances received unanimous support from the five-member Council. 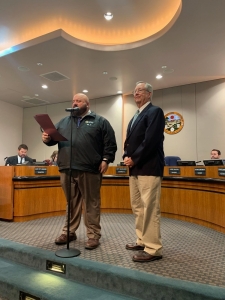 Recognizing Friends of the La Mesa Library’s 50th anniversary
Arapostathis presented John Schmitz, President of the Friends of the La Mesa Library, with an acknowledgement and special thanks for the organization’s ongoing efforts to promote the library and literacy. Schmitz addressed the council and meeting highlighting various successes in programming and funding.
Police Chief’s Quarterly Operations Report
Captain Matt Nicholass presented the quarterly operations report highlighting crime statistics, operation and communication efforts, and community and volunteer efforts by the La Mesa Police department.
The police department maintained a 100% response rate for emergency calls, surpassing the state mandate that calls be answered within 15 seconds. 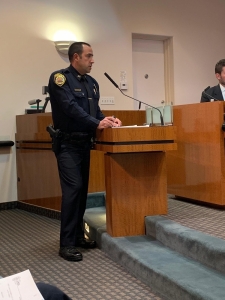 Nicholass also highlighted the increase in resources to address mental health concerns in the community through expanded hours for the Psychiatric Emergency Response Team (PERT).
As of September 2018, Narcan is now carried in every vehicle thanks to a grant program. Narcan helps save lives of those who overdose on Fentanyl and other opioids, also protecting officers who come into contact with it as a result of their work.
Weber asked for insights into the reason for increased contact with the homeless population as well as articulated procedures for those interactions. Nicholass suggested officers and social workers are allowed more time to interact with the homeless ,which would increase the rate of contacts. Officers are educated on services to offer and have information and contact sheets to distribute.
Board and commission work plan presentations
The commissions on Environmental Sustainability, Planning, Youth Advisory, and the Historic Preservation presented their working plans for the coming year.
Despite the lack of contention for the information items, Baber stressed the “genesis of the working plans question” was for the commissions to provide updates to Council to determine if the Council was onboard with the commission’s plan of action. Through that lens, Baber suggested these information items should be voted on for approval in the future.
Use of streets for storage of vehicles prohibited
The Council unanimously approved an ordinance that will prohibit vehicle owners from leaving their cars on City streets and alleys for more than 72 hours. To comply with the new ordinance, vehicles must be moved at least 200 feet during each 72-hour interval. The new rule will go into effect 30 days from the February 26 council meeting.
Climate action plan implementation
In response to state requirements, the Council approved a Climate Action Plan in March 2018. That plan outlines goals and targets to reduce community-wide greenhouse gas emissions by 15% in 2020 and 53% below 2010 levels by 2035.
Since then, city staff has worked to develop specific actions and plans for reaching next year’s 15% reduction goals and the longer-term targets of the Climate Action Plan. 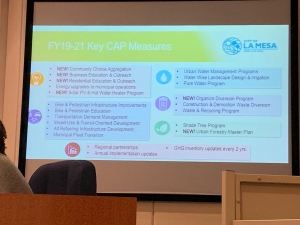 Implementation measures include community choice aggregation, business and residential specific education and outreach, energy upgrades to municipal operations such as electric vehicle charging stations set to go live next month, and installation of solar photovoltaic systems with already 420 expedited permits.
Creation of ad hoc citizen committee on homelessness
Arapostathis and Parent brought forth a proposal for the establishment of an Ad Hoc Citizens Committee on Homelessness. The committee would be formed of five to seven community members. Arapostathis stressed that he wanted broad representation of stakeholders on the committee.
The City Clerk will announce a call for applications. Applicants will be brought to the City Council for consideration similar to a board or commission recruitment process. The committee’s scope of the work would include recommendations of what La Mesa should do with respect to homelessness. Councilmember Kristine Alessio emphasized the need to outreach to businesses which, she indicated, have extensive and daily interactions with homeless populations and would have insights into addressing problems. Weber similarly stressed the importance of outreach to interfaith communities already doing work to mitigate the impact of homelessness.
Bonnie Baranoff spoke to thank the Council for listening to the community’s concerns and reiterated the work that La Mesa First United Methodist Church in providing services to the homeless population.
The council unanimously approved the creation of the ad hoc committee. Arapostathis indicated applications would go live soon.
Other Council actions
The council also authorized city staff to apply for a CAL FIRE Urban and Community Forestry Program to fund revitalization efforts for neighborhoods and corridors and to provide enhanced recreational opportunities in La Mesa.
In addition, Council ratified the approved design review of a proposed 16-unit apartment project on the 7500 block of University Avenue, west of Parks Avenue in the La Mesa Dale-Helix neighborhood. As approved, the three-story project will retain four existing apartment units in the rear of the property but demolish an existing commercial building and single-family residence. An existing billboard was already recently removed in anticipation of the project.