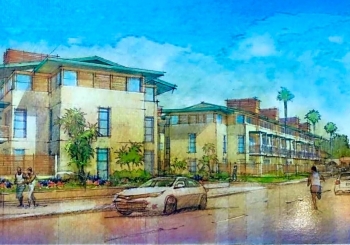 February 1, 2020 (La Mesa) -- La Mesa City Council met on January 28th. The most prominent item on the agenda was a hearing to consider The La Mesa Planning Commission’s approval of The La Mesa Quarry 2 LLC development project, an in-fill mixed-use development at 4400 Palm Avenue on a sloped property near Collier Park.

The development includes a 3-story, 21 unit apartment building with parking beneath and a separate office building. The Council voted unanimously to follow staff's recommendation and upheld the Planning Commission’s approval. The project is now in the site development plan stage.

While residents of nearby La Mesa Townhomes community spoke to the Council about the development project, there was not major resistance to the plan. Residents did want to make the City Council aware of some concerns and request improvements.  Resident Ajed Raji explained his biggest concern is parking. “Traffic is a nightmare,” he asserted. Other residents offered ideas for safety and accessibility improvements that could be “easily addressed,” said resident Huntington Hardisty.

Concerns involving pedestrian safety and a request for a new crosswalk caught the attention of Mayor Mark Arapostathis. The Mayor stated the addition of a new pedestrian crosswalk could be created for $25,000 to $35,000. Further, the City could proceed on this without making it a condition of the project. The Council agreed, as did the developer. The Mayor asked the City Manager to find funds for the new pedestrian amenity.

Other development-related topics included a desire by one resident for “zero emissions” developments. Another attendee expressed concerns over future impacts of state bill SB 50 on development size and loss of community control.  This controversial bill to increase affordable housing by mandating higher density projects in many residential areas despite existing zoning restrictions has since died on the State Senate floor, falling three votes short of passage.

Some ongoing agenda items were heard and approved again unanimously on a second reading, without modifications. These included poultry ownership in R-2 and R-3 residential zones as well as broader limits on outdoor smoking and vaping in public places. Carol Green, representing the California PTA, commended the Council for the

changes in the smoking ordinance. She also noted that “vaping emits 70 cancer causing agents,” and that children are most vulnerable to second-hand smoke.

In addition, the Council unanimously approving hiring Gregory P. Humora to take the helm as the new City Manager at compensation of  $211,057 per year. He has served as Assistant City Manager of La Mesa since 2016. Prior to that role, he acted as Director of Public Works of La Mesa, from July 2004 to 2016. He holds a Masters Degree in Public Administration from the University of Massachusetts, Amherst, and a B.S. from Worcester Polytechnic Institute. He steps into his new position immediately.