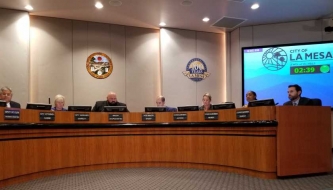 May 17, 2020 (La Mesa) -- On May 12th, the La Mesa City Council unanimously approved three considerations brought to the Council to aid businesses impacted by COVID-19, reopen some parks, and allocate federal CARES Act funds to help the homeless and others. 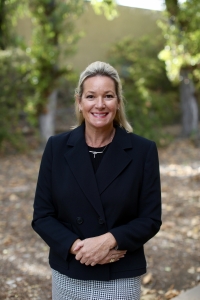 Per an earlier recommendation by Councilmember Kristine Alessio (photo, right), the Council voted to waive business license renewal fees and application fees from May 13, 2020 through April 30, 2021 .   While Councilmember Colin Parent acknowledged the waived fee of $35 for an in-city business license was a modest proposal, Mayor Mark Arapostathis confirmed that this was only the first step in relief for La Mesa businesses. Businesses with overdue payments may contact the City Manager’s office about waiving the fees as they are handling these requests on a case-by-case basis.

The Council voted to reopen McArthur park and Sunshine park under condition of the City Manager’s ability to step in if safety restrictions were not being followed. The Mayor wanted to confirm with the School District Superintendent before reopening Sunshine Park, which is part of Rolando Elementary and the School District. Two public comments supported the opening of the parks.

The federal CARES Act provided $262, 416 in funding for coronavirus relief in the city of La Mesa. City staff members presented to the Council on possible areas to focus the grant money on including homeless population relief, COVID-19 testing sites, food pantries, as well as financial counseling services.

All Councilmembers stated they wanted to put the funds to use as soon as possible and felt it best to focus on areas in which an immediate impact could be felt. Mayor Arapostathis restated the broad scope of the current Community Development Block Grant (CDBG) and that the focuses would not ignore previously stated goals of the grant.

The Council voted unanimously in selecting homelessness relief, care funding, and COVID-19 testing as the main priorities for the funds. An official amendment to the action plan will be presented and voted on during the May 26th City Council meeting.

In public comments, residents voiced concerns over possible evictions and outlined proposed moratorium guidelines. The City Manager later confirmed that eviction cases in La Mesa were suspended as per the state’s current guidelines.

Another comment asked the Council to look at the need for mixed use corridors in La Mesa. A final comment by Elizabeth Jenner thanked the Mayor and others for their role in cleaning up trash and shopping carts on Massachusetts Ave and Waite Rd. Jenner also commented on the complexity of chronic homelessness and hoped individuals would use the city’s resources.

Check the city’s website for additional information regarding coronavirus.