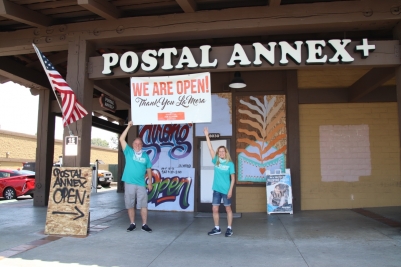 June 12, 2020 (La Mesa) -- Steve Clay first got wind that his family’s package mail business, The Postal Annex, was being looted from an app he has on his phone.

“The security system copied to my phone and notified me the glass was being broken, and a little after that I knew they were in the store,” he said.

Clay’s store in the La Mesa Springs Shopping Center was among about 50 properties in the area that sustained damages and losses resulting from rioting and vandalism that took place during protests in and around downtown La Mesa on May 30. The protests were part of a national outcry of revulsion following the death of George Floyd, a black security guard who died after a Minneapolis police officer put his knee on his neck for nearly 9 minutes.

Once he and his wife, Janelle, were able to check on the store, sometime after 11 p.m., Clay described what he saw as a war zone. “There were cars on fire, and looters everywhere,” he said.

While Clay and other business owners affected by the rioting express sympathy with the peaceful protesters, they are now dealing with various stages of cleaning up, figuring out losses, and filing claims for those losses with their insurance carriers.

The Clays, who have three employees, were among the businesses that received nearly immediate attention after the rioting died down that night as dozens of local residents turned out to install plywood boarding on the store’s smashed out windows and save other businesses from being trashed.

“I did an interview with Channel 8 that apparently was live streamed and went viral, and in about a half hour there were some 30 people who showed up here,” he said of his 17-year old enterprise. “Some of them we’ve known forever and some we didn’t know…They told us ‘We love you guys, and we’re here to put up some boards (on the windows)…Then they went down the line and were putting up boards on the other stores next to us. I was totally blown away.”

Clay says he is still in the process of figuring what the costs of his total losses are, gathering all the necessary documents and invoices, and dealing with his insurers. “They’re still reviewing the claims, but it’s probably between $10,000 to $12,000 in damages,” he said. 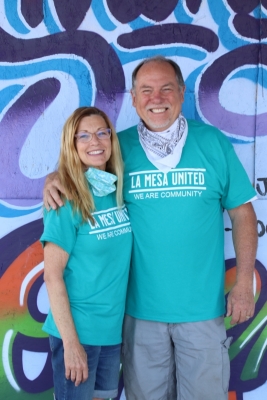 Besides all the windows that were broken, the carpeting was destroyed, cards, gifts and other merchandise was stolen, and a large copying machine was totally damaged. The business, deemed as essential by the state, continued to operate during the pandemic, and reopened on Monday, June 1 after repairing riot damage.

Clay said he is hoping to obtain most of what was lost because of the insurance coverage, but is taking a worldly view of the situation. “If it comes my way, that’s great. If it doesn’t, I’ve got to keep a positive attitude.”

Insurance attorneys representing policy holders say while most businesses carry standard insurance that covers damages caused from rioting and vandalism, things may be complicated due to the global COVID-19 pandemic.

“I’m expecting that will be the biggest sticking point,” said Kim Winter, the practice group leader for law firm Lathrop GPM in Kansas City, Mo. “Here you have businesses that were shut down because of COVID-19…and then they get hit with this (rioting).”

Many businesses filing claims for business interruption losses resulting from the pandemic aren’t covered by their policies because of the lack of physical damage, and some policies even have virus exclusion clauses, said Hahn Pham, an attorney with Lathrop GPM in Minneapolis.

Pham said the pandemic claims along with the many claims coming in after the recent rioting may be causing a backlog. “Don’t be surprised if you don’t get paid in 24 hours,” he said.

He advised businesses impacted by damages to carefully inspect their policies about what’s covered, and submit claims promptly. Many policies require holders to submit claims as soon as practically possible. If they aren’t, the claims may be denied, Pham said.

Insureds need to gather all the relevant information about what was stolen and damaged, as well as evidence of any bodily injury that they may have sustained, he said. “Some policies may require the filing of a police report.”

Should a business get denied the claim, or receive less than what they think they deserve, Winter advises the insured not to accept it as a done deal. “I would caution policy holders not to take a flat ‘no,’ she said. “Don’t take no for an answer, even if you’re just sending them back a letter.”

If there’s still no compromise by a carrier, insureds can always consult with attorneys who specialize in this type of law, Winter said.

For those local businesses in La Mesa that can’t get full satisfaction from their carriers, some relief may be obtained from a GoFundMe account that has collected more than $185,000 as of June 9, according to Rick Wilson, president of the San Diego East County Chamber of Commerce. Combined with $5,000 contributions each pledged by three organizations---California Coast Credit Union, Sycuan Casino, and EDCO, the total comes to more than $200,000, Wilson said.

The Chamber’s foundation board will develop criteria for businesses to qualify for receiving donated funds that will soon be sent out by multiple media channels, and start the process for the money distribution.

The goal is to encourage every impacted business to apply so that the funds can get into business owners’ hands quickly, said Wilson. He said the target is to have the funds distributed by the end of June.

“The sooner we get the money into their hands, the sooner they can take action to do whatever they need to do to get their business up and running again,” he concluded.

He is a graduate of Fordham University in Bronx, N.Y. where he earned a bachelor’s degree in communications. He now lives in Santee.