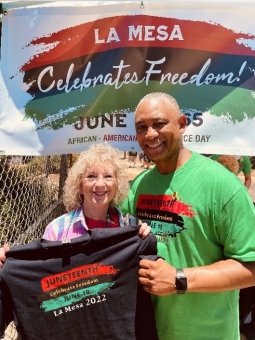 This La Mesa Juneteenth and Friends celebration is a grassroots community effort to bring the rich heritage, culture, and fun of a Juneteenth Jubilee to La Mesa, East County and the wider San Diego region.

Juneteenth commemorates the official end of slavery in the U.S., when enslaved people in Galveston, Texas, learned of their freedoms on June 19, 1865, over two years after U.S. President Abraham Lincoln issued the Emancipation Proclamation. The inaugural commemoration of it was in 1866, and it was officially recognized as a federal holiday in 2021.

“La Mesa has had its ups and downs, and we just wanted to bring La Mesa back together,” said Allan Durden, founder of lamesajuneteenthandfriends.com, and organizers of the event. 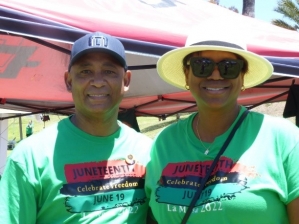 Durden went on to say that people from throughout the community have been enthusiastic in their support of the event. “The City Council of La Mesa has been great. The Mayor, Mark Araposthathis, has been great, the City Council, Jack Shu, has been here setting up since 8:00 this morning. Chief Sweeney is here. So, we have a lot of participation, and a lot of support,” shared Durden.  “We have a lot of support from the businesses on the boulevard, a lot of food places. Just a whole bunch of people coming together to celebrate Juneteenth.

“And it's not just African Americans,” continued Durden. “We have black, white, Hispanic, Asian, all kinds of people here to celebrate Juneteenth, because it’s a celebration of everyone.”

Councilman Jack Shu was also in attendance at the community event. “This is really giant step for La Mesa, to move our entire city towards this inclusion, and caring about all people,” shared Shu. “It’s a change for our community. A change that the community has been yearning for so long. And I’m glad where doing it here with the Juneteenth event.” 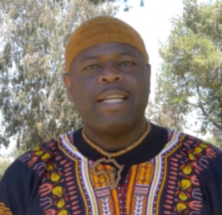 Yusef Miller, (photo, left) with the North County Justice and Equity Coalition, also attended the event because “Juneteenth is extremely important to African American history. It’s 89 years after the 4th of July in 1776, when African Americans were freed from slavery. It’s 51 years after the National Anthem was penned in 1814. So, this really has something to do with us in a more intense and personal level.”

“It’s very important that African Americas, and other people, come and celebrate with us as part of American history and the freedom of African American,” continued Miller. 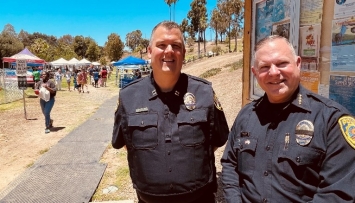 y Sweeney (photo, right). “We’ve been working very hard to make sure this is a great community event, to draw people to McArthur Park, in La Mesa, to learn, and just be with, the community,” said Chief Sweeney proudly. “It’s a great opportunity for us [the La Mesa Police Department], so we didn’t hesitate at all.”

Referencing the difficult times the community had experienced following the death of George Floyd, and the incident between La Mesa Police Officer Matthew Dages and Amaurie Johnson, an African American youth that sparked a riot and now a time of healing, Chief Sweeney, stated philosophically. “Those were important events. And we’re moving forward. We have different community allies now. We’re having conversations, and we’re learning from one another. Not only what we can do better, but what the community can do to help us. And that’s been the big thing. Having open conversations and communication. We are moving forward.” 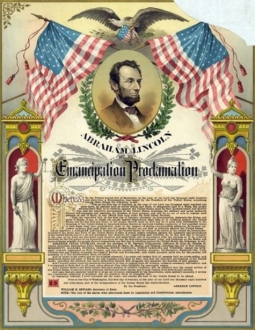 Following the Union Army victory at Antietam, Maryland, on September 17, 1862, President Abraham Lincoln issued a preliminary emancipation proclamation.  This document gave the states of the Confederacy until January 1, 1863 to lay down their arms and peaceably reenter the Union; if these states continued their rebellion all slaves in those seceding states were declared free.

According to the Smithsonian National Museum of African American History and Culture, “even though the Emancipation Proclamation was made effective in 1863, not everyone in Confederate territory would immediately be free. It could not be implemented in places still under Confederate control. As a result, in the westernmost Confederate state of Texas, enslaved people would not be free until much later. Freedom finally came on June 19, 1865, when some 2,000 Union troops arrived in Galveston Bay, Texas. The army announced that the more than 250,000 enslaved black people in the state, were free by executive decree. This day came to be known as "Juneteenth," by the newly freed people in Texas.

The inaugural Juneteenth commemoration was in 1866, and it was officially recognized as a federal holiday in 2021.

Today, according to the LaMesaJuneteenthandFriends website, “the holiday is about the celebration of Black culture, history and life, bringing people together to honor all those who came before us and fought for the rights and privileges we hold today.”

“Our purpose for holding the La Mesa Juneteenth and Friends 2022 celebration is to bring our community together. To help strengthen our community by raising awareness of the Juneteenth jubilee

and sharing the important historical significance. We want to provide a family orientated celebration with participation from our local businesses, educators, writers, churches, city leaders, and performers in the La Mesa and surrounding areas. All are welcome to join us.”

For more information about La Mesa Juneteenth and Friends, go to: https://lamesajuneteenthandfriends.com/

Chief of Police Chief Ray Sweeney Enjoying One of the Exhibits at Juneteenth: