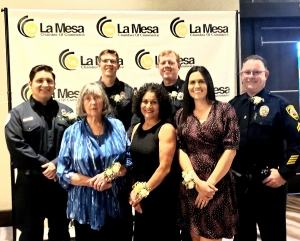 March 21, 2020 (San Diego’s East County) Before the state of California shut down all but essential businesses in an effort to contain coronavirus, the La Mesa Chamber of Commerce held a dinner celebrating their local heroes on March 12 at Sycuan Casino – Resort. The event was their 12th Annual Salute to Local Heroes.

At that time, gatherings were limited to 250 and the attendance was reportedly 167.

“We’re celebrating the strength of our community,” said the Chamber’s President and CEO Mary England. “I have seven heroes.”

Those seven heroes selected to receive awards were:

During the cocktail reception one recipient gave his perspective on different kinds of “awards.”

“I’ve been an officer for 21 years,” said award recipient master officer with the La Mesa police department Colin Atwood. Atwood appreciated the award but also noted, “As nice as these things are, it’s the little handwritten notes from the community that brighten my day.”

Music and entertainment for the function was provided by Miles Moynier and Linda Baltodano.

Another attendee noted the importance of the chamber’s work.

“This organization does so much for the community,” said   County Supervisor candidate for district 2 -Joel Anderson.  “Fundraisers like this help fund their charities they do all year.”

CEO Mary England briefed the crowd with resources to refer to concerning Covid19 in her welcoming speech. 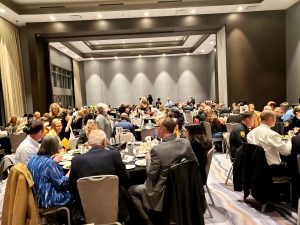 England thanked the numerous volunteers and sponsors for helping with the event. Awards were bestowed during the dinner.

England noted that La Mesa Mayor Mark Arapostathis, who was called away due to an emergency meeting concerning the coronavirus outbreak, was unable to assist with the installation of the board of directors.