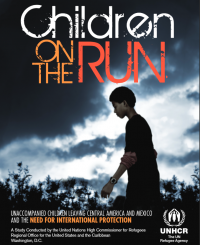 “We  expressed our concern over the current debate that is focusing on sending the children back while we believe it should be focusing on the care and safety of the children.”—Doug Brunson, UCCLM Committee on Border Justice

Over 50,000 young children have crossed the border to seek refugee status in the U.S. this year.  Some are fleeing gang violence and drug trafficking, others are escaping grinding poverty or trying to reunite with family already in the United States.  Many have paid large sums to smugglers and made dangerous journeys atop trains to get here from Central America, only to be placed in overcrowded, often unhealthy holding facilities while awaiting determination of their status by understaffed courts.  Some have also endured the verbal abuse of militant protestors seeking to banish them back to the horrors from which they fled.

Inspired by The Rev. Kaji Douŝa’s sermon on Sunday, July 13, members of the United Church of Christ of La Mesa gathered to discuss the child immigration crisis and how the congregation, as a justice-oriented church, should respond.

“Following the guidance of Jesus in Matthew 25 (“...to the extent that you did not do it to the least of these, you did not do it to Me.”), we searched for ways that we could help to resolve the crisis and add a progressive Christian voice to the debate,” Doug Brunson UCCLM Ad Hoc Committee on Border Justice says. “A letter-writing campaign, directed toward our congresspersons and enthusiastically endorsed by the congregation, started us off.   We eagerly anticipate their responses.  Our next step was to request a meeting with Representative Susan Davis, a valued opportunity to further express our concerns.”

An ad hoc committee, consisting of Becky Motlagh, Dick and Karen Hatch, Jack Gillespie and Doug Brunson, met with Representative Susan Davis on Friday, July 18.  There, the UCCLM members thanked her for her support of refugees and other justice issues. Also, Brunson says, “We  expressed our concern over the current debate that is focusing on sending the children back while we believe it should be focusing on the care and safety of the children.”

The church members conveyed the sense of urgency in their congregation for their justice-oriented voice to be heard and action taken by Congress and the Administration to meet the children’s needs. They also asked how they could be helpful to Congresswoman Davis as she works to resolve this emergency in a politically polarized environment.

In addition, they presented their Christian Perspective and Policy Recommendations sponsored by Clergy and Laity United for Economic Justice-California and others (see documents on the church web site at http://tableucc.com/witness/sign-the-petition-central-american-refugee-crisis/ . The recommendations  call for petitioning elected officials to take those steps needed to adequately serve the needs of these children – providing, among other necessities, safe and humane living conditions, medical care, mental health support, access to visitation ministries, pastoral care, appropriate play and activities, quick reunion with family and legal assistance and representation.  This petition also urges Congress to not approve President Obama’s request to “more expeditiously deport” the children and to provide, instead, the “screening, services and status required by the Trafficking Victims Protection Reauthorization Act.”

Rep. Davis, noting that the immigration issues are complex and unlikely to be resolved in the current Congress, expressed the hope that funding for the immediate crisis could be achieved.  She thanked the church members for their input and invited them to attend her Community Town Hall on July 21st “so our rational, faith based voice could be heard in what she considered could be a contentious discussion, a meeting in which our committee was pleased to participate,” Brunson says.

Next up, the group plans a community panel discussion on the issue.

He adds, “UCCLM’s voice will continue to be heard.  We invite other concerned citizens to join us in speaking up for these innocent children.”