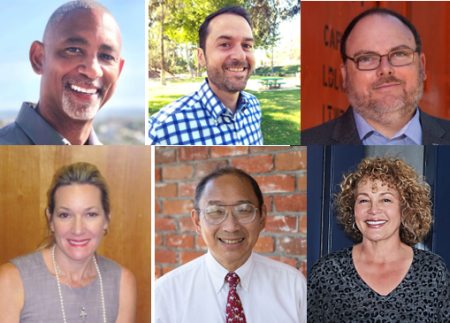 August 29, 2020 (La Mesa) – Six candidates are vying for two seats on the La Mesa City Council. East County Magazine invited all candidates to participate in a candidate forum this Thursday, September 3 at 7 p.m. Have a question for the candidates?  You can send it to editor@eastcountymagazine.org by 12 noon on Thursday.

Four of the six candidates have confirmed they will participate.  Shown in the photo above, they are Allan Durden, Mark Papenfuss, Councilman Colin Parent, and Jack Shu.  Councilmember Kristine Alessio and Laura Lothian are not available but agreed to do an interview with ECM via Zoom, which we will post when completed.

The forum, held virtually via Zoom due to COVID-19,  will be live-streamed on Facebook here:  https://www.facebook.com/EastCountyMagazine   Video will also be recorded and posted at www.EastCountyMagazine.org after the forum. We thank the #FacebookJournalismProject for supporting our virtual candidate forums during the pandemic.

Below is information on all candidates running, listed in alphabetical order:

Kristine Alessio is a native of La Mesa who was elected to the La Mesa City Council in 2012 after serving for many years as a planning commissioner. She holds a law degree and has served as the city’s representative on SANDAG. She is a former board member on the East County YMCA and East County Boys and Girls Club, also donating time to support various local charities.  As candidate not aligned with a political party, she says she can represent all La Mesans, equally and fairly. www.alessio2020.com

Allan Durden has been a La Mesa resident since 1964.  A Helix High School graduate, he earned a football scholarship to the University of Arizona and entered the Arizona Sports Hall of Fame. He is a licensed insurance agent and regional sales manager. He says his mission is “to keep our La Mesa streets safe and our small business community thriving.” https://www.facebook.com/allandurdenforlamesa/

Laura Lothian is a realtor with a business in the village. She is running to bring a business perspective to the board and vote for personal and business freedoms, reducing regulations. She supports the farmer’s market and festivals in the village and wants to create a “garden district” similar to one in New Orleans. She is on  the La Mesa Village Association board and previously ran for council and mayor. She voices support for police to address civil unrest. www.LauraForLaMesa.com.

Mark Papenfuss raised his family in La Mesa, where he says he’s had ties for 25 years. He cites recent events, globally and locally, that have hit La Mesa hard. He states that he has worked for a Fortune 500 company and wants to bring more small businesses into  La Mesa. He also aims to expand the farmer’s market, support affordable housing with adequate parking, and help La Mesa “rise from the ashes.” http://www.markp4lamesa.com/.

View video of a separate Zoom interview with Mark Papenfuss, who was unable to attend the forum due to a family emergency:  https://www.youtube.com/watch?v=ugPdqOtqHCY&feature=youtu.be

Colin Parent was elected to the La Mesa City Council in 2016.  He serves as executive director and i general counsel for Circulate San Diego. He advocates for affordable homes, accessible transit, and reducing greenhouse gas emissions. He also cofounded La Mesa Conversations. https://www.colinparent.org/about

Jack Shu is a former California State Parks Superintendent and past president of Cleveland National Forest Foundation. He has advocated for healthy communities, human rights, environmental protection and justice. He pushed to form a Citizens Public Safety and Oversight Task Force, to address concerns of policing and racial justice.  He worked to form La Mesa’s Citizens Task for on Homelessness and served on the Wellness Committee. https://jackshu.com/