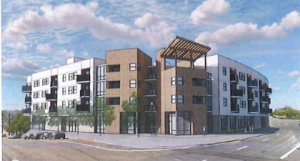 Nov. 1, 2021 (La Mesa) The appeal on a future housing project that challenged the steps toward building a 49-unit mixed-income project on Wilson Street was denied during an online Zoom meeting of the La Mesa City Council on Oct. 26.  The motions moved forward with councilmember Bill Baber the sole no vote.

The multi-story building was proposed as a density-bonus affordable housing project for households earning less than 60% of the median area income and four units designed for very low-income seniors over age 55, earning 50% or less of the area median income. Developer CityMark Communities, LLC. sought waivers to height, parking, pedestrian standards, open space, and landscaping standards. Per state law, these waivers for affordable housing cannot be denied unless a project would adversely impact health, safety or the environment and cannot be mitigated.

The proposed project is on land that houses the La Mesa Woman’s Club and borders St. Luke’s Lutheran Church across the street from Hobby Lobby and Discount Tire.

The appeal was Item 10 on the agenda—consideration of an appeal of the planning commission’s determination to uphold the approval by the development advisory board of Project 2020-16 (CityMark Communities, LLC) a site development plan for a 49-unit mixed-use apartment development at 5220 Wilson Street, APN 490-660-31-00 in the RB-D-MU (residential business/urban design overlay/mixed use overlay) zone.

City of La Mesa’s director of community development, Kerry Kusiak, introduced the points of contention in the appeal and the city’s response.

The key issues raised in the appeal:

Kusiak argued that there is no evidence on the record of any effect on historical resources. Analysis completed by a qualified historical professional concluded that the existing building does not have historical significance.

2.       Improper granting of waivers of development standards due to lack of physical constraints affecting the project and because the waivers would result in specific and adverse impacts health, safety, and the physical environment.

Kusiak countered that there is no evidence in the record to suggest that the granting of the proposed waivers would result in a specific adverse impact on the public or environment. State density bonus law does not require a property to be physically constrained to be eligible for waivers.

3.       Concerns about administrative aspects of the project review, including conduct of meetings, scope of review, compliance with the Brown Act, public noticing, and framing of issues.

Kusiak’s responded that the review of the project has been conducted in accordance with all applicable local and state regulations. The entirety of the first appeal was represented in the staff report to the planning commission and the commission was properly instructed as to their scope and authority.

Kusiak’s response --- no traffic impacts were identified in the Traffic Assessment Letter (TAL). There is nothing unusual about the existing roadway. Typical street frontage improvements are being requested. The applicant’s voluntary $5,000 contribution to crosswalk improvements is not mitigated under CEQA.

Attorney Felix Tinkov had ascertained that a violation of the Brown Act occurred and that the public was denied access to a government meeting when the La Mesa City Council, during the time of the pandemic, performed government business via emails that did not allow the public to comment or witness the proceedings.

“St. Luke’s Lutheran Church is disappointed with the way the City of La Mesa has approached and handled the project,” said Judi Cole, senior pastor via an emailed comment. She cited the way the project has gone through various committees and the alleged violation of the Brown act among other issues.

Members of the La Mesa Woman’s Club spoke in favor of selling their building, with some describing it as “antiquated,” noted that the women’s clubs in San Diego and Pacific Beach also choose to sell their buildings.

“Our clubhouse no longer serves the needs of our club,” said Betsy Quinn.