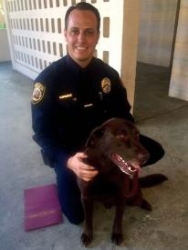 April 14, 2015 (La Mesa) – A retirement, traffic circle safety on Harbinson after a crash, and permitting  projects after construction (from a chicken coop to a cave) were topics before the La Mesa City Council tonight.

The unmistakable star at the La Mesa City Council meeting today was Max, who is retiring at the ripe age of 7. That’s because Max is a chocolate lab and Police narcotic dog. Together with his handler, Officer Derek Cox, they have recovered over 2,700 grams of narcotics and made more than 156 felony narcotics arrests. To show he was on the job one last time, Max pawed up to inspect the Councilmembers’ desks as Cox made the rounds shaking hands. As handlers and dogs form such a strong bonds, Max is being allowed to stay with the family he loves.

The question of traffic circles on Harbinson Avenue drew the largest crowd of the evening. Harbinson Avenue is a Local Collector in the City’s Circulation Element and General Plan, running through the residential neighborhood between El Cajon Boulevard and University Avenue. As such, it placed high in the rankings of the Neighborhood Traffic Management Program when the Council adopted it in 2004.

In 2011 ballots were mailed to 382 household deemed within the area of influence, resulting in the construction of traffic circles in the intersections at Annapolis Avenue and Watson Way in 2013. As part of the 2015 staff update report to the Council started last month and continued tonight, Greg Humora said that “the traffic circles have been effective at decreasing maximum speed” but cited “undesirable secondary effects at the traffic circles” leading staff to recommend the traffic circles be removed and other options be considered to replace them.

Several people living near the circle at Annapolis testified. Mr. Castillo wanted them removed, saying accidents have resulted from cars going too fast to make the turn. He said a speeding vehicle mowed through his hedge and hit his truck in his driveway; his wife and kids were almost hit as they were backing out of their driveway; and that his neighbors’ jeep had been totaled by a car which hit the curb and flew out of the roundabout. He has erected a barrier outside his house for his family’s safety, fearing a car may one day go through his son’s bedroom wall.

“Those circles do help. People go as high as 60 mile per hour,” said Sandra Durbin, and told of another driver speeding around to pass her car as she drove down the street. “They’re better than nothing,” she said, adding however, that she would also be happy with speed bumps instead.

In the end, the Council voted 5-0 to remove the speed bumps as soon as possible and instructed staff to come back within 90 days with proposals of what to replace them with.

The most contentious issue of the evening regarded the permitting of construction after the fact on Fletcher Drive, with both the owner and downhill back fence neighbor appealing different parts of the Planning Commission’s decision.

Stevie and Doug Younkin said they discovered the permitting problems during disclosure when the purchased the property in a short sale in January 2013, and so they approached the City in order to get the structures permitted. They had requested Special Permits for the excess height, and Variances for the structures in the setback.

The Planning Commission had granted the setback variances for the pool and garage but required the shed and chicken coop be removed, approved the special permit for the wall height, and denied the special permit request for increased height for the garage and cave structure. The Younkins were appealing the denial of the extra height for the cave, while their downhill neighbors, Theresa and Nathan Pyle wanted the Council to weigh in as they were concerned about drainage, structural safety of an unpermitted wall, and a party cabana on the property line above their backyard.

Another neighbor, Tammy Small, complained about the noise from the cabana by earlier owners of the property, and that the pool drained into their yard and had flooded her house in the past, so that her father had had to dig a trench to redirect the water out to Bancroft Drive. Small said they had received complaints about the water that drained from their property into the street.

City Manager said that the structural safety of the retaining wall and drainage issues were not before the Council to be voted on tonight, and would be subject and have to pass City engineering inspections.

The Council voted 5-0 to approve the variances for garage, pool and cave, granted the special permit for the height of the cave and the retaining wall, and reaffirmed that the cabana on top of the garage must go, along with the chicken coop and shed.