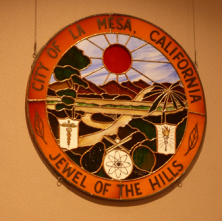 April 17, 2020 (La Mesa) -- Discussions of park closures and easing of parking restrictions were on the agenda at the La Mesa City Council’s meeting on Tuesday, April 14.

To maintain social distance, the city planned to stream its first ‘live’ meeting in more than a month on its website and via a Facebook Live feed, as well as simultaneously broadcast on government access channels. Sadly, things didn’t go as expected due to technical difficulties, but officials conducted business anyway.

Highlights of the meeting included the City Council approving La Mesa Mayor Mark Arapostathis’s March 13 appointments of City Manager Greg Humora as the Director of Disaster and Emergency and La Mesa Director of Finance Sarah Waller-Bullock as the Assistant Director. It was emphasized that both positions are needed in order for the city to declare a local emergency in response to the coronavirus (COVID-19).

It was determined that the official proclamation will help La Mesa recoup some of the financial costs associated with serving the city during the time of COVID-19. The city will be able to tap into emergency funding, at both the state and federal levels, should the monies become available. The city advised that it has already initiated several actions to assist the community in the face of the virus.

Such steps included  freezing evictions related to issues caused by the virus, closing City Hall to the general public, except for by appointment for specific business needs,  offering telecommuting arrangements for most city employees, temporarily halting street sweeping parking violation enforcement, installing free 5-minute parking spaces in the downtown Village for pick-up only, and eliminating  the downtown Village permit parking fees for the second quarter of the year.

As part of preventing gatherings of people during the coronavirus pandemic, La Mesa has also closed all of its city park playgrounds, including the dog park at Harry Griffen Park, as well as playing courts for basketball, pickleball and  tennis at parks,  park parking lots and the “Secret Stairs,”  a popular exercise site located near downtown.

On Tuesday, the City Council unanimously voted to close parks in La Mesa that have gates and to restrict the remaining park access only to individuals and members of  households.

Councilmember Colin Parent stated that he has received several inquiries from La Mesa residents about which businesses in the downtown La Mesa Village are remaining open.  He said this list is available through the La Mesa Village Association’s website and updated regularly. He also referred citizens to the City’s website for updates and changes as they occur.

Parent added that the City Council has adopted specific motions related to the emergency pandemic situation, which include directing its staff to reprogram a “reasonable number” of high-volume traffic lights, in a reasonable time frame, to automatically display pedestrian crossing signals.

Also discussed was the 2020 TransNet Local Street Improvement Program for fiscal years 2021-2025.  This included items such as congestion relief and local street improvement items. The Council will be coordinate specifics with SANDAG going forward.

Councilmember Parent also spoke of approving a proposed lease with the city of El Cajon for leasing the Heartland Fire Training Facility for 5-10 years.

Councilmember Akilah Weber stated that the San Diego Metropolitan Transit System (MTS) may have a possible reduction in services due to the pandemic.  She referred the community who uses their transportation to the MTS website for updates and information.

Mayor Arapostathis and Councilmember Parent stated that they are forming a subcommittee to work with staff to “identify how the city can create more space in the public right of way for safe pedestrian and bicycle use”.

Parent concluded that he was “very disappointed that the public was unable to view this meeting live.” He as well as the other councilmembers concurred that they’re optimistic the next meeting, scheduled on April 28 at 6 p.m. should be available live to the public. He then went on to give a recap of the meeting, which lasted nearly three hours.

For additional information, the public may view the video of the meeting on the city’s official website at http://lamesaca.swagit.com/play/04152020-1015.