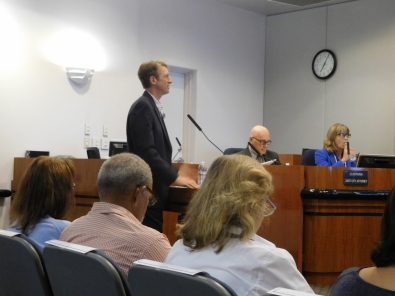 October 3, 2016 (La Mesa) -- As the issue of climate change becomes more elevated, more cities are taking a harder look at their carbon footprints and mulling alternatives.

In California, at least two counties and a few smaller cities have already formed new entities that purchase a larger share of their energy from renewable sources and are doing it at cheaper rates than was previously provided by the investor owned utility.

On Sept. 21, two La Mesa citizen groups, the city’s Planning Commission and its Environmental Sustainability Commission held a joint meeting to discuss the possibility of forming a community choice aggregation program, or a CCA.

The two-hour session was not intended to take any vote on the issue, but simply to explore the idea and see whether the city should give it greater consideration, said Jim Newland, the Planning Commission chair who convened the meeting. 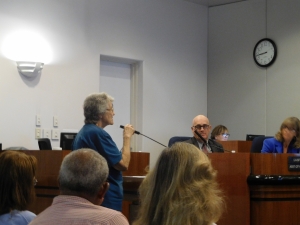 The majority of the evening was taken up listening to a presentation by Scott Anders, director of the Energy Policy Initiatives Center at the University of San Diego, about CCAs--- how these are formed, how they’re working, the rates they’re charging customers, and other aspects surrounding such entities.

While there is lots of interest in forming CCAs up and down the state, the two largest ones are in Marin and Sonoma counties, although another CCA was formed in the city of Lancaster, Anders said. Seven states including California adopted rules permitting this arrangement.

CCAs don’t replace investor owned utilities which remain as the distributor and operator of the power lines and systems. The utilities also continue to bill the customers of the new CCA.

The new programs permit buying power from other energy sources, presumably increasing the amount of power originating from renewable sources, such as solar, wind or hydro electric.

Although California has mandated that utilities derive 33 percent of their energy from renewable sources by 2020, and 50 percent from renewables by 2030, many citizens feel they aren’t making enough of an effort, and desire a quicker pace on those targets, Anders said. 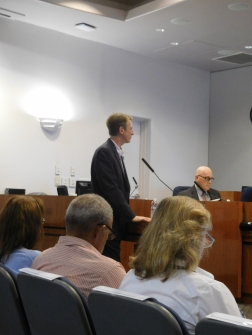 But if saving money on energy was the primary motivation, the data presented by Anders from both Marin and Sonoma suggested there is little price difference.  Customers with the CCA saw slight declines in monthly prices in Sonoma, but slight increase in Marin. If customers decide they want 100 percent of their delivered power generated from renewable sources instead of 30 percent from renewables, they would pay about $10 more per month than what the utility charged, data shows.

When a CCA is formed, all customers in the service area are automatically enrolled, but have the ability to opt out, and return to the utility for their service, if they choose.

Because of that opt out provision, most customers remain in the CCA, and give the agency the ability to purchase and structure long term power contracts, Anders said.

Of course as in any change, there are real risks to entering into a CCA arrangement, Anders explained. There are undetermined start up costs; it’s a new line of business that a region may have difficulty running; and there’s the chance for potentially higher rates, he said.

Commissioners from both groups wondered why their utility, San Diego Gas & Electric, would agree to let this arrangement move ahead, given it appears to be cutting into their profits. Anders said that the company is opposed to CCAs, as are most investor owned power providers yet the arrangements have been authorized by the state legislature, and the Public Utility Commission.

The fact is the new entities have proven to be more effective in obtaining energy from renewable sources than the regular power companies, and in many cases, have reduced the costs of that energy for customers, Anders said.

“This was exactly what de-regulation was all about,” he said, alluding to the massive failed experiment by California in the late 1990s that permitted major power companies such as Enron to manipulate the state’s power system, and caused electric bills to skyrocket.

He added: “But that restructuring failed so maybe that’s not a good example.”

Jack Shu, a citizen at the meeting, urged the city to continue looking at adopting a CCA because SDG&E has continued to raise energy rates with little justification.

Kayla Race, another speaker and a director with the Climate Action Campaign, said CCAs are being considered by several North County cities including Carlsbad, Del Mar, Encinitas, Oceanside and Solana Beach. The latter small city recently commissioned a feasibility study to research the issue, one of the first steps in forming a new CCA, she said.

“This is an opportunity for consumers to have another choice on where they get their energy from, and how clean it is,” Race said after the meeting ended.