June 26, 2019 (La Mesa) – La Mesa’s City Council, majority approved a 3-year permit for McFarlane Promotions to run the city’s popular Oktoberfest in partnership with the La Mesa Village Association, which will be from October 4-6 this year.

This year’s event will include several changes including an additional beer garden that will be German-themed with traditional German music, foods, and German-costumed servers.  Event-goers can still find a broader variety of music and foods at another beer garden plus food trucks that will be moved to a side street for improved flow; a total of 45 food vendors and 95 nonfood vendors will be included. There will be two kids fun zones with attractions such as a trampoline, inflatable jumps, and face painting. Wiener dog (dachshund) races, another crowd favorite, will return but be moved to Alison Avenue.

McFarlane will  provide a 50% cost recovery to the city, up to a maximum of $50,000 per year. Councilmembers Kristine Alessio and Akilah Weber voted no, wanting a higher cost recovery rate in the wake of projections that the city will likely have to tap its reserves to balance its budget in the next couple of years.

In the past, the city did receive 100% cost recovery, but circumstances changes and with new organizers facing challenges, the city dropped the rate to 50% several years ago with a goal of eventually raising that to 75% and ultimately 100%.

The change was sought to bring stability to the process after the event underwent multiple changes of organizers in recent years. At one time, the event stretched to both sides of Spring Street.  But police concerns over fights in proximity to the trolley stop pushed the city to restrict the event to only one side of Spring Street, which limited the number of booths—and revenues from booth rental spaces.

A former merchants’ group ran into financial problems when the city shut down La Mesa Blvd. for a year for a street and landscaping 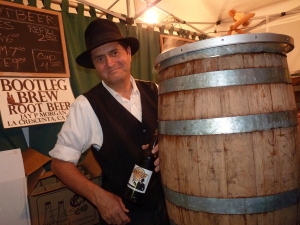 improvement project.  That group ultimately dissolved and failed to pay the city $40,000 to reimburse for police and security costs.  The city took over running the event for a year.  An outside organizer came in.  Then a new group, the La Mesa Village Association, was formed and organized the event with McFarlane. During the metamorphosis the 3-day event shrunk to just 1-day at one point, with concerns about the future.

Last year’s event was a success, drawing an estimated 50,000 people to the village, according to McFarlane, who added that revenues are invested back into both Oktoberfest and Holiday in the Village events. The event has long been touted as the biggest Oktoberfest in our region.

Weber, the newest councilmember, peppered staff, organizers and colleagues with questions on the finances and history, noting that the city budget is tight and funds are also need for parks, road repairs and other projects.

Mayor Mark Arapostathis explained, “The old group wasn’t able to pay their bills” several years ago, so Council stepped in because otherwise “there wasn’t going to be an Oktoberfest.”  With changes in organizers, Council gave each a break and kept cost recovery at 50%.

Representatives from McFarlane and the LMVA explained that McFarlane takes on substantial risk fronting costs up front given that unpredictable factors such as rain could negatively impact turnout and revenues.

Councilman Baber asked, “If we do three years, do we avoid this crisis every year?  Will we even need to have this meeting?”  He then asked for organizers to report back to Council each year to get feedback and respond to any concerns. Staff assured that Council can cancel the project if terms are violated.

Councilman Colin Parent said of Oktoberfest, “For the last two years, it’s been great,” and made the motion to approve the 3-year contract with 50% cost recovery up to a $50,000 maximum.  Baber cited reinvestment in village events and the Mayor noted that when there was 100% cost recovery, “it was a different looking event with many vendors.”

But Alesssio noted that “things are tighter for us,” siding with Weber in opposing the measure which passed 3-2. 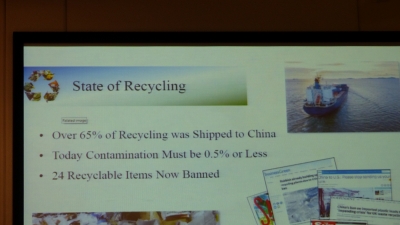 Council also held a hearing on raising EDCO rates, a proposal that passed unanimously despite 108 protest letters received, though no one testified against the hike at the hearing.

The changes are motivated in part by new state mandates for higher recycling rates to cut organic refuse 75% by 2025 and methane emissions 50% by 2020. Also, China no longer accepting some recycling materials.

Customers will receive organic waste kitchen caddie and EDCO is constructing a new anaerobic digestion facility that will create renewal natural gas fuel that will power its clean-fuel trucks as part of helping La Mesa to meet its zero-emissions climate action plan goal.

Discount rates will be available to low income seniors age 62 and up.