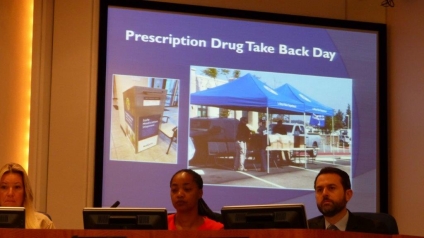 By Miriam Raftery
September 28, 2019 (La Mesa) – A citizens-led effort to clean up their blighted West La Mesa neighborhood has borne fruit. On Tuesday, the La Mesa City Council unanimously approved two pilot programs offering grants to businesses in the area to improve the streetscape.
A small micro-grant program will be funded by three councilmembers (Kristine Alessio, Akilah Weber and Bill Baber) who voluntarily agreed to give up their expense reimbursements.  The larger grant program for neighbors negatively impacted by illegal pot shops will be funded through tax revenues from new recreational cannabis businesses that the Council voted to legalize.
Craig Reed with Envision La Mesa, a citizens group that began after discussions on the Next Door discussion forum online, gave a presentation on their second annual Environmental Scan and trash cleanup efforts.  He explained that when La Mesa Police shut down illegal marijuana dispensaries, “they left in a hurry and they left a mess” along the University Avenue, west La Mesa Boulevard and El Cajon Boulevard corridors.
The group walked streets block by block to compile a report on properties blighted by graffiti, vandalism, trash or other eyesores, then made recommendations to the city council to correct these problems. 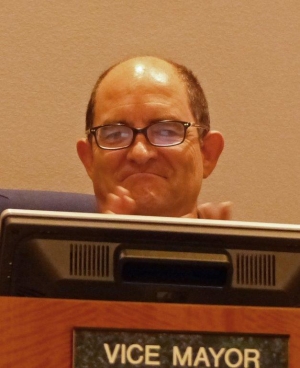 The measure allows dispensaries that are already in the pipeline (opened or in the application process prior to Tuesday’s vote) for medical marijuana sales to also sell recreational marijuana. No new applications for recreational cannabis only will be accepted. If all applications in the pipeline are ultimately approved, there could be around 17 cannabis dispensaries in La Mesa, a nine-square-mile city.
The ordinance also legalized other types of cannabis businesses such as manufacturing, testing and indoor cultivation, though those uses will be restricted only to the city’s industrial area (atop a hill behind Dixieline Lumber), not other commercial zones.  Delivery of legally-sold cannabis products will also be allowed in La Mesa.
Bill Baber, proponent of the measure, has said he respects the will of the voters.  Fully 59% of La Mesa voters approved Proposition 64, which legalized adult-use of cannabis statewide.  Over half (53%) approved Measure U, which legalized medicinal cannabis in La Mesa, while 78% approved the city’s Measure V last year, which allows taxation of both medical and recreational cannabis.
No one spoke against the measure, although Community Action Service and Advocacy (CASA) sent a letter to councilmembers voicing concerns over a potential increase in crime and addiction if the measure were approved.
Baber has countered that thriving legal cannabis businesses could drive illegal operations out of La Mesa.
A spokesman from Urban Leaf, a chain of cannabis retailers, noted that the measure will bring good-paying jobs to the city.  “We’ll employ at least 100 people in La Mesa,” he said, adding that the company will pay a “living age” to its employees.
The City Council also approved an ordinance to allow La Mesa Village enhancement funds to be used for nonprofits that wish to hold events in the village that benefit the community.  Mayor Arapostathis said, “I support this because I hope it can eventually lead to a business improvement district” similar to those in some other communities. 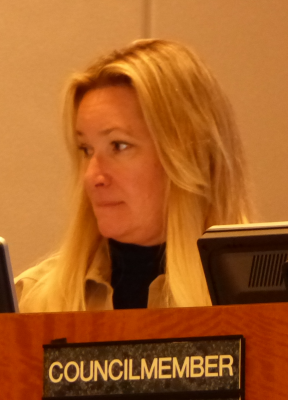 Alessio (left) questioned the action, noting, “It’s a lot of money that we’re not using on a streetscape” or other items such as a sign that “people have been wanting.”  The measure passed 4-1, with Alessio opposed.
The Council also heard a report from La Mesa Police on crime trends, which are at an overall historic low, with no murders or stranger-rape cases during the second quarter of this year, though robberies are up over the same period last year.
A police department spokesman gave examples of how technology has helped to nab some suspects, such as surveillance cameras and video footage used to nail a masked 7/11 robber and a package thief.
Narcan, now carried by all officers, has been used to save lives of several overdose victims.
Following the success of prescription drug take-back day, part of a nationwide effort, the La Mesa Police Department has now added a drop box in its station, where people can drop off unneeded prescription drugs year-round.
During public comments, Janet Castanos said a coastal cleanup along University creek resulted in pickup of over 500 pounds of garbage . “It was a beautiful day in the neighborhood,” she said.
The Council also heard from several applications for the city’s Youth Advisory Commission. A lighter moment came when one teen applicant mentioned his experience serving on a model United Nations Commission represented Palau, “a totally irrelevant island nation.”
Councilman Baber quipped in response, “That’s what it feels like representing La Mesa on SANDAG.”