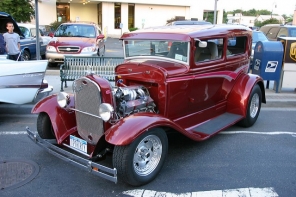 May 22, 2017 (La Mesa) – La Mesa’s City Council will consider a proposal at its Tuesday meeting to issue a special permit to expand the La Mesa Classic Car Show from eight weeks to 14 weeks.  The shows would be held Thursday nights from June 7 through August 25 and would be run by the newly formed La Mesa Village Association (LMVA).

Staff has recommended approval, provided 100% cost recovery from the applicant is required.

The city had been searching for a new downtown partner for this and other events since the former La Mesa Village Merchants Association, facing financial troubles, failed to repay approximately $40,000 owed to the city for cost recovery related to events.  The debt was turned over to a collection agency.

Despite the prior merchants’ group stiffing the city’s taxpayers, the staff’s proposal does not include any requirement to obtain payment up front from the new merchant’s groups.  The city estimates it will cost $4,598.16 to hire a police officer to provide security.  The merchants’ group will supplement that with private security officers.

This would not be the LMVA’s first event.  The new merchants’ group previously organized Holiday in the Village in December.

Dean owns several restaurants and coffee shops in the village that have become popular gathering spots.  He also owns the planned Depot Springs Brewery, which has had its opening date delayed several times.  In a post earlier this year on the Next Door neighborhood forum, Dean indicated he’s had a change of contractors and would have the project open by June, however no announcement has been forthcoming.

The car shows, if approved by Council, would include full street closures including La Mesa Boulevard from 4th Street to Acacia Avenue. Visitors could enjoy DJ music, with live bands on four of the event dates.

Staff recommended reserving some parking spaces for customers of businesses in the vicinity.

View all agenda attachments on this item.

The Council meeting will be held at 6 p.m. on Tuesday, May 23 in City Council Chambers, 8130 Allison Avenue in La Mesa.