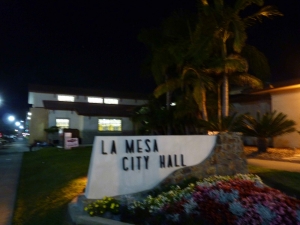 Council will hear a report on the independent investigation into a controversial use of force by a La Mesa Police school resources officer at Helix High School in January of last year. A video showed the officer knocking a handcuffed female student to the ground.  According to the city, the student declined to speak with the independent investigator and has filed a lawsuit against La Mesa.

Council will also hear results of the Neighborhood Traffic Management Program and vote on whether to accept the report, which includes a 2019 work plan and ranked list of streets for traffic calming measures.

In the first, staff recommends that Council uphold the Planning Commission’s approval of a conditional use permit for a dispensary to open at 8160 Parkway Drive, denying an appeal.

The second appeal is sought by the San Diego Center for Children, which objects to the Planning Commission’s previous approval of a dispensary at 7339 El Cajon Blvd., Suite C, an action that the Council blocked, leading to a legal battle. The applicant has argued that he invested significant funds based on city staff finding the site to meet requirements of the city ordinance. But the appellants argues that his business is child-oriented and the dispensary location would violate the ordinance, which is vague on the definition of a child-oriented business. Staff recommends that the Council receive public testimony, consider arguments on both sides, as well as information in a staff report before making a decision to either uphold or deny the appeal.

In addition, Council will consider appointments and reappointments of Councilmembers to outside boards and commissions and hear a review of the City Council’s recent change in meeting times to evenings only. Council will also vote on amending a contract with the California Public Employees’ Retirement System on required employee contributions.