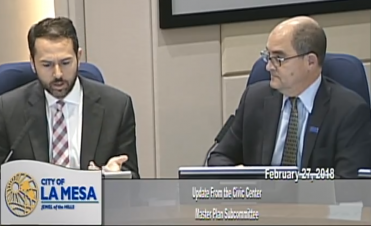 March 6, 2018 (La Mesa) – In response to a city memo on the future of La Mesa’s civic center that omitted any mention of a long-promised new library, Friends of the Library members showed up at Tuesday’s City Council meeting, speaking volumes on the need for more library space.

The Civic Center Master Plan Subcommittee memo stated, “The Civic Center site will include introduction of market-rate housing, as well as office and/or governmental use, park and parking uses in combination with another civic building.”

John Schmitz, President of Friends of the Library, told Councilmembers that after receiving the agenda and memo, he asked the group’s chair to encourage members to show up because the “magic word, `library’” was missing.  He added, “I wanted to make sure as you go forward you definitely included options for an expanded or new library.”

Councilman Bill Baber responded, “Colin and I did a lot of work with staff and what we tried to do was not box ourselves into anything,” and, “we only wanted to write a one-page memo because we couldn't put everything in.”

La Mesa’s old library was torn down amid redevelopment that included a new police and fire station. An interim library built between city hall and the fire station was intended to be only temporary, with a larger, 20,000 square foot library to be built later. The land is owned by the city, but the library is run by the County.

Sharon Smith told Council, “We got shafted when we got our new library. It's beautiful but its totally inadequate, really.” 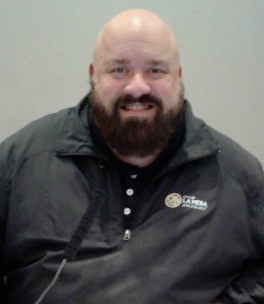 As for the Civic Center, Mayor Mark Arapostathis (photo, right) said he supported a “community center/library” that includes space for the arts.

But regarding the former police station site, Arapostathis stated, “I think it does need to be housing.”

It appears that legally this may be the case, too, with groundbreaking needed within a few years, according City Manager Yvonne Garrett.

Councilman Guy McWhirter joked, “What about a mini waterpark?” and said that events are what pack libraries, not books.

Pat Kellers, a La Mesa resident since 1958, spoke in support of a library on behalf of the local American Association of University Women (AAUW). “We'd like to see you work and put a priority for a library to encourage education for children, which AAUW feels very strongly about,” said Kellers.

Kathleen Brand, a resident of La Mesa, landscape architect and planner, spoke in favor of housing as well as a “stronger library,” and against surface parking lots.

Sharon Smith testified “Libraries are more than books and we need to look at that and take it very seriously.” 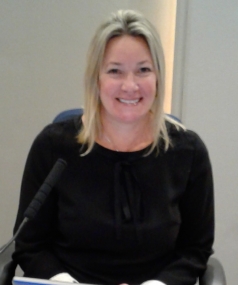 She cited flaws in the consultants’ work to date. “I want the study to be done better than the last one that we saw on this. If they don't bring us a better product, than I really want us to get a different consultant.”

On the housing component, Alessio says, “I love the idea of having 100% of it being affordable.”

Councilman Colin Parent disagrees with Alessio on affordable housing at Civic Center and confirmed with the City Manager that she would look into a mix of incomes.

Parent also warned it may indeed be an underwhelming report by Keyser Marston Associates (KMA), as its scope “is about helping us be able to eyeball what to expect from developers who propose things.”

The report, says the City Manager, should be finished in three to six months.

Council voted 5-0 to authorize the City Manager to pursue the report from KMA.

“The clearance rate jump is due to residents reporting suspicious things in their neighborhood,” said Vasquez. “We've been able to enjoy some better staffing levels, the staff are out in the field and when we go to the high crime areas where there's a series related, talking to individuals, visibility.”

Brenda Hammond thanked LMPD officers “Koby and Bush for handling a situation this week so professionally.”

La Mesa's draft climate action plan is up for a vote March 13.

The Mayor nominated Peter Charest to the Community Relations and Veterans Commission and the Council approved the nomination 5-0.

Renée Levin, Lamplighter Theater's city liaison, spoke on two upcoming shows, Night Mother, which opened on March 2 and runs through March 25 and the final show of the season, Peter and the Starcatcher, which will open April 20 and close May 13, concluding, “I look forward to seeing you at the theater.”

On Baber and Parent not including the inadequate temporary La Mesa Library in their “memo” due to wanting to “keep it to one page”
and then Baber justifying the no mention by saying he doesn’t want to “Box the Council into anything.”

So let’s not Box our City Council in like those who utilize the Library currently are?

Why not, at least, move that poorly located Post Office into the, greatly anticipated, mostly by Council, Civic Center? Expand the Library, not move it. Get Dianne Jacobs on Board before she’s gone and before we taxpayers have to give $1million back to the County for not fulfilling our City’s commitment of a permanent Library! City Council and City Manager, give the people of La Mesa something that you know will be an additional and tangible part of your Legacy to La Mesa. Show us how compromise can work for all your voting La Mesa Constituents.

Take a tour of Alpines Library City Council with a population of 14,000 vs 60,000 in La Mesa and then tell us you don’t want to box yourselves in, or that you’d prefer a Water Park or another Theatre Venue for the Arts.

Is this then the real beauty of Term Limits for those on Council who fought so valiantly for It? Where long term commitments can be quietly omitted, ignored, or placed on the uppermost back shelf hoping we won’t notice and counting on us to forget until they Term Out or move on?