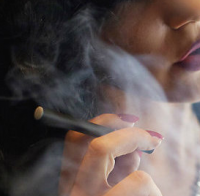 By a 4-1 vote, the council majority voted to restrict electronic cigarettes in the same manner that cigarettes are already regulated.  The lone no vote came from Councilwoman Kristine Alessio, who lit up an e-cigarette and a standard cigarette to compare the vapor and smoke levels that wafted across the Council Chamber.

In so doing, the Councilwoman committed a misdemeanor, since smoking cigarettes indoors in a public place is already illegal in La Mesa.

La Mesa’s political leaders won’t have anymore smoke-filled rooms in the future, however,  such puffing e-cigarettes in public places will be prohibited.  Council instructed staff to draw up the ordinance for final approval at the next Council meeting.

The majority of speakers voiced support for banning e-cigarette use in public areas.  La Mesa joins El Cajon, San Diego and other cities in regulating use of the devices.  Reasons cited include public health and growing use of e-cigarettes by children, including some sold with candy flavors and cartoon characters that appear to target minors.

Alessio, however, sided with preserving freedoms for smokers over protecting children and others from potential health risks of e-cigarettes, which can contain nicotine and other toxins.

In addition to this hot topic, the Council also voted on issues involving expenditure of funds.  Councilmembers Ewin and Alessio pushed through a measure to require Councilmembers to get advance permission for expenditures as small as a postage stamp, while conversely supporting a measure to spend public funds to hire a public relations professional for the city.