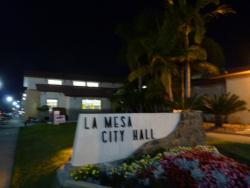 Lynn McRey (photo, right) told Council that “cooperation is important to success.” She handed out a paper listing chronology of PBID efforts dating back to 2001, adding that there are currently over 400 improvement based programs in California, “all serving the same goals.”

Bill Ratan said the limited budget may make it impossible to fund a full-time executive director to run PBID.  “What we need to make PBID successful is to have La Mesa be a destination location.” He gave examples, like high school battle of the bands or summer movie nights. “With your approval tonight, we hope to go forward,” he told Council. But that approval was not granted.

McRey noted, “We’re strictly providing a PBID proposal, no new petitions.”  An earlier, broader effort failed to secure enough signatures of downtown stakeholders to gain approval, with smaller business owners contending they could not afford the fees that would be assessed to each property owner for efforts to include marketing downtown activities as well as maintenance of trees, lighting and more.

Councilmember Ruth Sterling stated, “I want to thank both of you. I appreciate that you downsized it. I feel like with that, you have tried to work with Council and the suggestions. [But] I don’t know how I can support this going forward with how it is now.”

When Councilmember Ernie Ewin asked about how many properties there were then and now, McRey answered, “293 properties originally, 80 now.”

Mayor Art Madrid gave his opinion. “It is premature to say we’re not going to accept it. We don’t have the data.”

First to speak from the public was David Smyle from La Mesa Citizens Oversight. “I would ask you to give a vote of ‘no confidence.’ There’s not enough money.”

Former mayoral candidate and downtown business owner Craig Maxwell, gave his opinion. “[Mayor] Art [Madrid] has been the driving force all along,” he said of the PBID effort, which Maxwell opposes.

Bill Jaynes from All Thing Bright and British was the last to speak.  He recalled that the initial goal of a PBID was “ to establish maintenance mechanism to help streetscape. The time for Council to act is now,” he urged. “ Simply vote against giving any more money to this process.”

Jaynes wanted to talk about a maintenance concept instead of PBID.  Sterling wanted to include Jaynes on the Council agenda  in the future to discuss the matter. Vice Mayor Kristine Alessio agreed. Councilmember Mark Arapostathis concurred, but only if Jaynes brings some stakeholders with him to give their opinions. Jaynes agreed with that.

No one spoke in favor of PBID from the public.

Council voted not to approve the PBID report before moving to defund the PBID consultancy.  Councilmember Ewin told ECM that "We asked questions as we have been able to do a number of times in the past 19 months" but did not receive substantive replies. "They wanted the Council to accept intentions and little data so they could move to the next phase.."  He also raised concern that as structured, the PBID could allow a handful or property owners to control the PBID. "It's not based on the number of property of property owners, it's based on the size of their parcels. While it could be well intentioned it could be more punitive than beneficial."

Councilmember Ewin wanted an update on any further work by Ed Henning, PBID committee, and any city staff on PBID. Ewin first wanted to know when the PBID process ends.

City attorney Glenn Sabine answered, “There’s no provision for ending of the process.. It can go on forever.”

Ewin then asked what actions the Council could take on PBID.

Sabine told him, “You could take a vote of ‘no confidence.’ It doesn’t have to move forward.”

Mayor Madrid said, “I’d like to add it depends on a number of factors. It varies.” He observed that in some areas, approval of a PBID has taken years before ultimately succeeding.

City manager David Witt told Ewin, “Realistically, it can go on or die off from lack of interest.”

Ewin then proposed that the remainder of the money for PBID be returned to the city’s parking funds. Sterling seconded the motion. The vote was 4-1 with Mayor Madrid the sole vote against the money transfer.

Thank you for this article.

Having read elsewhere that I am to report back "on [my] proposal to start a maintenance district," it is heartening to see it recognized that there is more than one maintenance concept that has been given short shrift thus far.  It is my understanding that Ms Sterling and the Council asked me to return to discuss my proposal to simply use parking meter monies and why this best accomplishes the City's policy to pay for any maintenance costs over and above what is commonly referred to as "baseline." I believe this to be superior to a Maintenance District, and certainly to the PBID, as the Downtown Parking Fund is an existing mechanism that:

a) has roughly congruent boundaries with the proposed Downtown Streetscape Improvement Project,

b) would incur no, or at most de minimus, additional overhead costs beyond creating a new line item in the Fund's budget,

c) can quickly come online now that we are mere months from breaking ground and time is of the essence,

e) finally recognizes the lessons learned and reifies the promises made after the failure of a similar scheme to impose a BID on unwilling Village "stakeholders" fourteen years ago,

f) guarantees that all funds are generated inside the District. Only those who shop, dine, or do business here will pay to ensure the success of the Streetscape. (By the way, you really SHOULD shop, dine, and do business here: although our seemingly interminable squabbling might suggest otherwise, we don't bite!)

All that said, there are merits to a Maintenance District as well, and we will be seeking meaningful input from ALL sides as the Village moves forward. Deena While, the unsung hero of the PBID fight, and I are restarting "A Village United" and will begin canvassing next week, after seeking clarification from Ms Sterling and the Council as to the exact scope of our assignment. Please be assured that we commit to fairly present the consensus, if any, and regardless of outcome, when this issue returns to Council.

Bill Jaynes
ALL THINGS BRIGHT AND BRITISH
8401 La Mesa Boulevard
619 464 2298
(family owned and PBID-free for the past quarter century, and now a quarter more!)

Tuesday night the PBID was exposed as the half-baked sham it is and has always been; a way for the city to simultaneously, A) Relieve itself of the financial responsibility of maintaining the "new improved" Village and, B) Greatly increase its control the Village's future development.  Good riddance!