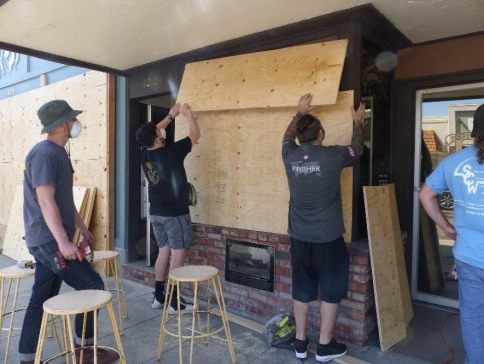 Photo: Some businesses have been hard hit by both the pandemic shutdowns and business disruptions from looting, fires and vandalism

At the closed session, for which the public can email comments by 4 p.m., includes potential sale of a public parking lot with meters behind the burned Randall Lamb building and behind many restaurants and businesses on La Mesa Blvd.

Also on the closed session, council will hear details of housing planned for the former police station site being leased for development, including affordable housing units.

At 6 p.m., Council will consider how to spend CARES Act relief funds due to the pandemic.  Staff has proposed renter relief as well as grants for small businesses and city costs. The Council majority previously voted against aid to businesses, so Councilman Kristine Alessio is urging the public to speak out if they want to see help provided for struggling small businesses in La Mesa, as other East County cities have already provided.

5 p.m. meeting: Should public properties be sold or leased for housing?

The Council will hear refinements of a previously approved lease of property at the southeast corner of Allison Ave. and Date Ave., commonly known as the Old Police station site, to USA properties fund for housing, including affordable  housing. Council will hear more details on the proposed mix.

The Council will also consider a proposal to have City Manager Greg Humora negotiate a potential purchase agreement of a separate property-- the parking lot in the village, (a parcel located at 8343, 8347 and 8357 Allison Ave.) with Brian Garmo and Jason Meram. The agenda does not indicate what the prospective buyers want to build.

The downtown area at times has a shortage of parking during weekly farmer’s markets and pre-pandemic, during large events such as Oktoberfest and Holiday in the Village.  Another issue is that parking meter fees are used to help support activities downtown that in help bring business to downtown to support retail in the city’s historic heart.

The actions prompted a call from a long-time La Mesa resident, who asked that her name not be disclosed.  “These are our public properties,” she said, praising the wisdom of city forefathers who laid out a civic center for the community. “We’re never going to get these back again,” if the properties are sold or leased for development.”

La Mesa’s voters have previously supported construction of civic buildings on public by approving ballot measures, indicating support of public facilities on public properties, the resident noted.  Some residents have long yearned for a new library which the city aspired to build, but lost county support due to taking too long to come up with funds. So loss of any additional public property will rankle some long-time residents.

The city however is also under pressure to meet state mandates for housing near public transit and faces new budget pressures due to the COVID-19 pandemic.

One public comment submitted calls on Councilman Colin Parent to recuse himself  for a potential conflict of interest.  Parent also represents Circulate San Diego, which advocates for housing near transit.

Parent, in a recent interview on KUSI, provided his vision to potentially rebuild downtown after three buildings were destroyed by fire and several stores have closed leaving some storefronts vacant.  He’s talked about a central plaza for dining and other public activities, though it’s unclear whether the lot in question is part of that concept.

Item 8 is consideration of proposed  use of $1.2 million  federal Coronavirus Aid Relief and Economic Seucrity (CARES) Act funds allocated to La Mesa through the state and county.

Staff has recommended $600,000 for a rental assistance program that would provide up to $5,0000 per eligible household for rent and utilities.  Eligible residents impacted by COVID-19 and earning less than 80% of the area’s media income would b be eligible to apply on a first-come, first-serve basis for up to 90 days of rent relief.

Staff also recommends a $600,000 grant program to help independently-owned businesses (brick and mortar only, not online companies) in La Mesa that were impacted by COVID-19. Grants of up to $5,000 for eligible businesses could be used on rent, utilities, insurance, payroll and other operations to cover 90 days of expenses.

In addition some funds would be used for the city’s unbudgeted expenses related to COVID-19 such as disinfecting parks and facilities, testing, and added payroll costs for public health and safety employees.

Councilmember Kristine Alessio, however, wants to aid struggling small businesses with grants. “Our City is the only city in East County that has not done a grant or loan program for our small businesses,” she wrote on Facebook, asking residents to speak out since three of her Council colleagues earlier opted not to approve any funds for small businesses, against staff recommendations, Alessio added.  Only Councilman Bill Baber joined Alessio in supporting aid for businesses. She proposes grants that could be used for rent, costs to move businesses outside, or other critical costs.

More than 66,000 businesses in the U.S. have closed permanently since the pandemic began in March, according to a YELP study, the New York Times reported in July.  That rate accelerated sharply from June15-29, the last period included in the study.

Harvard University researchers estimate the number is even higher. Citing survey data by  Alignable, the Harvard researchers believe nearly 110,000 small business owners nationwide shut down permanently from March to early May – and that doesn’t countythe may that have closed since then.

In La Mesa, nearly every business is affected by the pandemic.  Some remain shuttered completely, such as bars. Some, such as restaurants, have recouped partial revenues through takeout and outdoor dining, but with social distancing requirements they are unable to have as many customers as in the past, meaning sharp drops in revenues at best. For some, revenues have dropped to a mere trickle, as with hair salons allowed to move outdoors, but from a practical standpoint they are severely limited by space, weather, and health rules governing use of chemicals for procedures such as perms and hair coloring. Retailers report slowed sales due to customers staying home for fear of exposure to COVID-19 or due to reduced disposable income.

“If businesses close, unemployment rises and tax revenues decrease. The Council needs to know you value your small businesses and want to help,” Alessio states.

The agenda also includes some other items of interest.

Item 7 is a resolution to adopt a staff report recommending that a contract be awarded to Hillard Heintze,LLC, to prepare an After Action Report and Policy Review of the protest and riot that wreaked havoc downtown on May 30.

The consent calendar, which customarily passes unanimously, includes some items of interest including adoption of a five-year plan to use permanent local housing program funds to provide homeless services. Also on the consent calendar is a resolution authorizing acceptance of a Homeland Security grant program of $47,519 for terrorism preparedness and more.

Comments on any agenda item or non-agenda item must be submitted to COMMENTS@CITYOFLAMESA.US by 4 p.m. and be no more than 300 words.