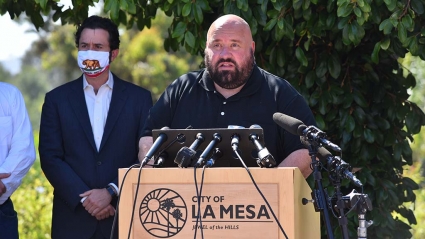 Photo:  La Mesa Mayor Mark Arapostathis said Wednesday: “We were totally overwhelmed by the situation. We were not prepared for a peaceful protest to erupt into the level of civil unrest we witnessed as the evening fell.” Photo by Chris Stone

June 6, 2020 (La Mesa) - Contrary to a recent pledge, La Mesa said Friday that a timeline of events related to last weekend’s protests and vandalism won’t be released until early next week.

“They canceled today’s news conference because they needed at least an extra day to get a comprehensive report together from a number of sources,” said Rachel Laing, a longtime local public relations professional now working for the city.

At a combative press conference Wednesday outside the La Mesa Community Center, Mayor Mark Arapostathis said the timeline would be released by noon Friday. It presumably would detail the police bean-bag shooting of Leslie Furcron at the La Mesa police station protest and the burnings of two banks nearby.

Laing told Times of San Diego via email that she’s helping out La Mesa council members and City Manager Greg Humora for the next couple weeks “while they compile and disseminate information on recent events.”

She said the timeline would be released Tuesday morning at the latest — but more likely on Monday.

“Sorry for the delay,” she wrote, “but it’s better to have complete information.”

Laing’s company profile notes she was deputy press secretary to San Diego Mayor Jerry Sanders from 2008 to 2012 and earlier was a public relations manager with Sempra Energy/SDG&E and communications manager for the San Diego Regional Chamber of Commerce.

Geneviéve Jones-Wright, a police critic, told Times of San Diego: “I understand the need to make sure that facts are in order, but when you make a pledge, you honor your word.”

She said the La Mesa Police Department and city have been losing credibility all week.

“Just compare what they said about Amaurie Johnson’s case during the press conference and the press release they sent out today announcing that they will not be pursuing charges any longer,” she said Friday. “They have a credibility problem on their hands, and that is not good when they say they want to repair relations with community members.”

In response to queries, Laing said Humora reached out to her Tuesday night to help with press conference logistics at the recommendation of a mutual acquaintance.

“At this time, my assistance is being provided pro bono,” she said. “I think my role can be characterized as an extra pair of hands as the city prepares a great deal of information about recent events for release to the press and public.”

The city doesn’t have a public information officer, she noted, although the police department does.

Lately, she’s been active on Twitter, a fierce critic of President Trump.

Her description: “Feminist. YIMBY. Lefty. Snarky. Founder & Principal of ThreeSixty Public Strategies. Lucky to advocate for clients/projects/initiatives I believe in.”

On Thursday, she tweeted: “I feel like everything in my life since 2012 (including all national and world events) has started me on a radicalization process that, if it continues at its current pace, will end up with me campaigning for president out of a modified electric VW bus inside of a decade." 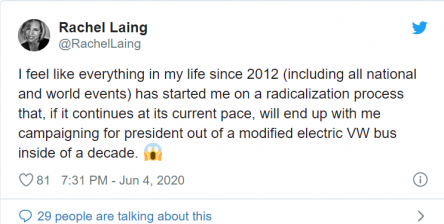 Meanwhile, the San Diego East County Chamber of Commerce Foundation announced it had raised over $160,000 from nearly 2,000 people to provide relief to small businesses within the City of La Mesa.

“The team heading the La Mesa Business Disaster Recovery Fund exceeded its initial fundraising goal of $50,000 in the first 13 hours last Sunday on GoFundMe and has now more than tripled that amount,” said Barry Jantz, a former La Mesa councilman and now CEO of the Grossmont Healthcare District. “The funds raised will be distributed to small businesses that suffered physical damage and other losses.”

He said a list of affected businesses was being developed.

“A time line, criteria and simple application are all in development for distribution of the funds,” Jantz said.